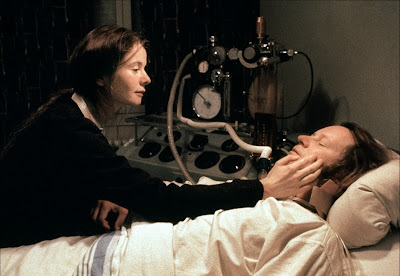 Is Lars von Trier something of an acquired taste? It might just be me, and while I thought very much at first that I’d like him a lot, I like him less and less the more of his work that I see. Riget was amateurish in some ways but interesting with its ideas if not always in the execution. Dancer in the Dark was a bizarre combination of naivety and brutality that I found worth watching if not so much something I’d want to see again in the near future. And now there’s Breaking the Waves, the first of von Trier’s loose trilogy of films about women who act immorally but still retain a certain amount of innocence, a trilogy that ended with the aforementioned Dancer in the Dark.

Bess McNeill (Emily Watson) is a vaguely simple, possibly dotty Irish girl who wishes to marry outside of her community. In fact, she wishes to marry a big Nordic guy named Jan (Stellan Skarsgard). They do marry, and for Bess, this is the beginning of the happiest time in her life. Jan is a big bear of a man, who introduces Bess to the pleasures of sex. The two are devoted to each other, but eventually, Jan has to return to work on an oil rig. Bess, whose simplicity tends to come out more in church (she prays and responds to herself for God), prays for Jan to be returned to her. He is; an accident on the rig has left him paralyzed.

Naturally, Bess blames herself, thinking that God has crippled Jan as a lesson to her for her selfishness. Jan, sick and fading, tells Bess to take other lovers and relay the details to him to give him something to live for. She is shocked and refuses at first, but when Jan’s health takes a dramatic turn for the worse, she agrees, and he starts to recover. Bess soon believes that what she is doing is God’s will—her promiscuity will somehow heal her husband from his injuries.

For whatever reason, this film was a very hard watch for me. Innocence corrupted seems to be a central theme for von Trier, and it’s a theme that I understand, but don’t really like much. His view of this theme, though, is an interesting one. If an innocent—and Bess truly is an innocent in this film—is corrupted in some way but doesn’t realize or understand the corruption, does it really take place? Certainly everyone in her town believes that Bess has become wanton, and by all accounts, she has. But in her world, her wantonness has a function, and to her mind, it must not be evil because it is God’s will.

This, of course, brings up the nature of religious belief. For many people, the idea of belief is more than just a touchy subject; it is taboo, and looking at the beliefs of others in a critical way is something that not only shouldn’t be done, but in a real way cannot be done. Bess’s beliefs in this case seem to run counter to everything that she has been taught, and counter to basic Western morality. But is she really guilty? Or are the townspeople who shun her essentially more guilty because of the way that Bess is treated?

If I’m honest with myself, one of the reasons I found this film difficult to get through was the graininess of the footage. It has the look and feel of a film shot on direct video for television, and that’s difficult to get past at first. In fact, when the film first started, I was unsure that it really was the film.

The performances are good in the main. Emily Watson is excellent as this somewhat addled woman who, for lack of a better way to put it, develops a sort of addiction for her husband, and then an addiction to this idea of curing him. Throughout, no matter how degraded she becomes with the various sex acts (and yes, rape is involved as you had to assume it would be knowing the basic plot), she maintains a sort of childlike innocence. Skarsgard is equally good, first as a physically imposing man and then later as an invalid. The unsung hero of the film is Dodo McNeill (Katrin Cartlidge), who is Bess’s widowed sister-in-law. Naturally, von Trier mainstay Udo Kier makes an appearance as well, and plays a stereotypically Kier-ian sadist.

I’m not sure what to make of it. I’m starting to see von Trier as a sort of low-grade Aronofsky. His work is interesting and thought-provoking. He has strange ideas and makes strange films in which not much good ever happens. But I’d rather watch an Aronofsky movie in most cases, simply because I like what he does with them more than von Trier does. Your mileage may vary, of course.

Why to watch Breaking the Waves: Lars von Trier’s early and edgy work.
Why not to watch: It goes in weird places, which means that it’s a von Trier film.
Posted by SJHoneywell at 11:50 PM