Ten years ago, the movie world was invaded by muggles wishing to be wizards and living vicariously through the vision of J.K. Rowling. The Harry Potter book series is probably the single best thing to happen to children’s literacy in my lifetime, and the movies have, regardless of quality, a legion of fans who will brook no comments that they are not the greatest thing since Citizen Kane. I have seen them all at one point or another. I read the books to my oldest daughter, and will read them again to daughter #2 soon. 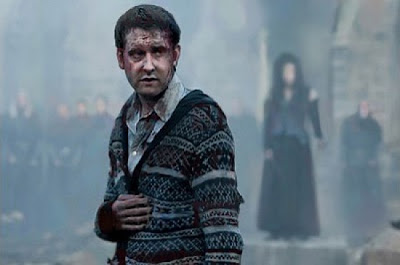 As it turns out, Harry Potter and the Deathly Hallows Part 2 opened at midnight on daughter #1’s birthday, so I naturally took her to it for closure, because it’s been a tradition, and because it was a pretty cool birthday present. The List has been notably silent on the Harry Potter series, which is interesting to me. On the one hand, while good and watchable, these are not the greatest films ever made. On the other hand, if for no other reason, these films resonate with a cultural significance that few other films can match. My guess is that it’s a coin flip for next year’s model. It’s possible they’ll add the last film because of its importance, or simply continue to consider it bombastic fare for Rowling’s legion of followers.

This is not a film to watch if you are not familiar with the series. Director David Yates doesn’t spend much time clearing up what has come before for newbies, which honestly shouldn’t be a problem. It’s helpful, though, to refresh yourself with at least Deathly Hallows Part 1 before entering the theater.

In many ways, we’ve seen the young actors who star in this film—notably Daniel Radcliffe, Rupert Grint, Emma Watson, Tom Felton, and to a lesser extent Bonnie Wright—grow up in front of us over the 10 years these films have been produced. They’ve changed significantly from the inexperienced kids they were to, really, genuinely veteran actors. Radcliffe in particular has concentrated on stage acting for the most part, a smart move in my opinion, because he’s going to be Harry Goddam Potter for the rest of his life.

Anyway, I should probably talk about the movie. It all comes down to the final confrontation between the virtuous and inexperienced young wizard Harry (Radcliffe) and the evil Lord Voldemort (Ralph Fiennes) in a battle not only to the death, but essentially for the soul of the magical community. There are twists and turns, evil, betrayals, redemption, and finally, sweet closure. I’m not going to recount the plot—chances are good that you’ve already seen this by now and have your own opinion, and even if you haven’t seen it, you know the characters and story well enough that a summary here isn’t going to mean much. If you aren’t familiar with the story, you’re not going to see this anyway.

Deathly Hallows 2 is in many ways the finale this series deserves. It has the effects, the bombastic battles, the quality CG work, and the almost melodramatic battle between one side and the other. Like many of the other movies, a great deal of the story is given pretty short shrift here. Specific points of character development are glossed over or ignored completely—mainly because it is assumed that the audience already knows what’s happening going in.

I appreciate that on one level. I don’t always need to be told every detail, especially in a story that I have at least a passing familiarity with. On the other hand, for a non-Potterphile like me, it’s frustrating. Seeing a particular character injured or dead on the battlefield with no mention of who it is or how they died or why they died makes the experience more difficult for me to follow. I don’t live and die by the books, and have only read each one once, and then out loud to my daughter. I don’t remember all of the details of each character.

So on a purely movie basis, this film is lacking in serious ways, but these are lacks that only someone like me would notice. The diehard fan will gloss over these gaps in the story without even noticing them—they fill in these blanks automatically.

But all in all, this film was good and appropriate. I’m not the target audience here. I was married and in my late 20s when the first Harry Potter novel arrived, and in my 30s and with a young child when the first movie appeared. I understand why those who grew up on these books love them dearly—I feel the same way about things like the Tripods Trilogy and Narnia and the works of Edgar Rice Burroughs. I love these things as only they can be loved when they are discovered by a reasonably bright 10-year-old. I get it, but not for me.

The truth is that no review is going to get someone to see this film or not see it. Those who have sat through seven films with Harry and company will sit through the eighth. Those who have not will not. Nothing I say will change that in either direction. If I had to give a score to this, I’d call it probably a 3 ½ out of 5.

Why the picture of Neville Longbottom (Matthew Lewis) up top instead of Harry? Because Neville is the shit, and has always been the unsung hero of the series.

Why to watch Harry Potter and the Deathly Hallows Part 2: Closure for one of the most lucrative and culturally significant events ever.
Why not to watch: You need to get through seven movies to get here.
Posted by SJHoneywell at 11:58 PM