Watch Out for Apples

Film: All About Eve
Format: Streaming video from NetFlix on rockin' flatscreen. 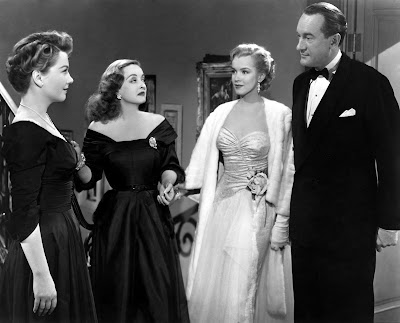 A common complaint in Hollywood is that there aren’t very many good roles for women. There’s some truth to that, and the Bechdel Test offers a reason why. But there certainly are some good roles for women out there, and 1950’s All About Eve is proof positive that they’ve existed for some time. This film is the first, last, and only example of a film with so many good female roles that four of them were Academy nominated—two each for Best Actress and Best Supporting Actress.

Like many a film of the day, All About Eve is told in a sort of flashback. We start with an awards banquet where a young actress named Eve Harrington (Anne Baxter) is being given the highest award. We then look back at how this particular turn of events happened, which is interesting because at this point, we don’t really know anything about Eve, or why there’s a particular turn of events that gets us to this point.

No matter. We’re introduced to an earlier form of Eve, a woman who evidently lives for the theater. More specifically, she lives for the performances of Margo Channing (Bette Davis). She claims to go to every performance of her latest play, and waits outside the theater for a glimpse of her heroine every night. Channing’s best friend Karen Richards (Celeste Holm), who is married to the playwright of Channing’s latest play, Lloyd Richards (Hugh Marlowe), takes pity on Eve and brings her back stage. Here Eve relates her story—a life defined by a marriage terminated by her husband’s death in World War II, and solace in the theater and the performances of her idol. Taking pity on her, Eve takes her in as an assistant, much to the disapproval of her other assistant, Birdie (Thelma Ritter, who is easily the most entertaining and level-headed character in the film).

While it takes us a little time to get there, it turns out the Birdie had the measure of Eve Harrington all along; she’s no poor, pitiable woman, but a vicious predator who wants nothing less than to usurp Margo Channing’s position, life, success, and lifestyle. She starts early at the birthday party of Channing’s beau, Bill Simpson (Gary Merrill). She convinces Karen to get her the job as Margo’s understudy in the next play, and then works to get Margo to miss a performance. She further invites all of the press to the performance that Margo misses and she plays, getting rave reviews.

Her plots continue, of course, but are so interesting, well-planned, devious, and coldly executed that spoiling them would be criminal. This is a film to be watched and experienced first-hand, not ruined on a blog.

The plot here is a timeless one, about age and aging, competitiveness, jealousy, and betrayal. Eve’s plot works in no small part because of Margo’s obsession with her own aging and what that means to her career. She’s a threat because she is young, pretty, and talented, but she is mostly a threat because she is young. Like many a person in a profession that glorifies youth and vitality, Margo Channing is necessarily worried about her own position as a leading woman on the stage, knowing that the years are passing rapidly, and that those choice lead parts written for women of ages she can still play will be out of reach for her soon enough.

What’s interesting to me here is not the plot though, although it is a good one and expertly scripted and acted. It’s the women characters themselves. Many films, including a good number of films today, feature female roles that are essentially window dressing for the men. The women exist only to stand behind the men and look pretty rather than actually having much to do with the film itself. Here, it’s the reverse. The men are much more the background characters while the women truly take center stage and control all of the action. These are not women who are looking to please the man in their lives or to stay home and bake turkey dinners. No, these are powerful, forceful women who act in ways to further their own ends. They have control of their own lives and push themselves for more control.

I’ll be blunt: this is one hell of a film. This is a sort of film that everyone really should watch, and should watch soon. How good is this film? How strong are the performances? Marilyn Monroe is in this film and is an afterthought.

I also very much like that the narration of Eve's story switches from person to person. Each part of the story is essentially told through the memories of one of the characters, and this person switches periodically through the film, giving us a much more well-rounded and complete view of exactly the sort of person Eve Harrington is, and what she does to those around her. It's a brilliant tactic.

I’ve never been a huge Bette Davis fan, but I’m going to change that opinion based on this film. I will admit to having liked her in other films, but not seeing why she was thought of so highly. No longer. I’m a fan now.

Why to watch All About Eve: Hollywood skewers itself by proxy.
Why not to watch: If you’re one of those people who hates Bette Davis, there’s not much here for you.
Posted by SJHoneywell at 11:48 PM