Battle of the Sexes

First, a note on the format. I’ve often watched films in my living room on the television Sue and I got when we were married nearly 20 years ago. The television was damaged when we moved 12 years ago by the movers, but it hung on. Still, like an old horse, it was starting to die off and it finally kacked it a couple of days ago. We’d been talking about replacing the old beast for awhile and this weekend, we finally did. The “middlin’-sized living room television” is dead. Long live the flatscreen. 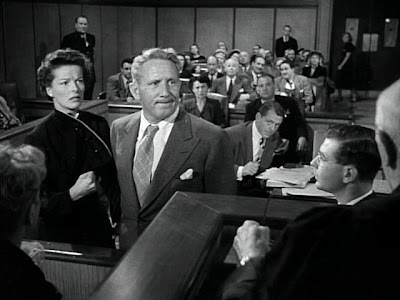 I had high hopes going into Adam’s Rib. The main reason my hopes were up was because of the famous chemistry between stars Katherine Hepburn and Spencer Tracy. The chemistry truly is there, too. I realize that the two had an open secret affair for years despite Tracy’s marriage, and this was an opportunity to see the two of them onscreen together and see how they really cooked.

The problem with Adam’s Rib is that it frequently gets in its own way with the message it is trying to present. The overall intended message is a good one. What kills the film for me in a lot of ways, though, is that the way the film works seems to undercut that message it tries to project. In other words, if we accept the film’s ultimate message, the film itself disproves it. And around and around the mulberry bush we go.

Everything starts when harried and ignored wife Doris Attinger (Judy Holliday in her first-ever film role) attempts to kill her husband Warren (Tom Ewell) and his mistress Beryl Caighn (the always-marvelous Jean Hagen). The attempted murder fails. District attorney Adam Bonner (Tracy) is given the case of trying Mrs. Attinger. His wife Amanda (Hepburn) sees this as a case in which a man would be treated differently than a woman for the same crime. Since she is also a lawyer, she takes the case defending Mrs. Attinger. Plot achieved.

The Bonners have an idyllic marriage that is thrown into complete chaos by this arrangement. Adam does everything he can to get her to drop the case, but she won’t, and so the two prepare to square off against each other in court while attempting to remain a truly happily married couple on the home front. But, since this is a romantic comedy, you know going in that things aren’t going to work that way.

Things are complicated in a small way by the neighbor across the hall. Kip Lurie (David Wayne), an effeminate songwriter and pianist who appears to be as close as a character in 1949 ever got to being gay, has a massive crush on Amanda and doesn’t really care that much if Adam knows about it. He’s less real competition than he is someone to act as additional comic relief.

What follows shouldn’t be a surprise to anyone who has ever seen a movie ever. The case proceeds, the two lawyers banter back and forth in the courtroom, things become heated at home, and the courtroom turns less into a place where the law is decided and far more into a circus, a fact that only benefits Amanda and damages Adam’s case.

The outcome of the trial is fairly predictable, but I’m more comfortable putting such things under a spoiler warning.

Naturally, the jury decides to acquit because Amanda’s closing is compelling (if this were a man defending his home, you wouldn’t imprison him) and because Adam’s closing arguments are muddled and interrupted by Amanda. When I said at the top that the film seems to disagree with its own premise, this is what I mean. Amanda turns the courtroom into a circus throughout the trial, which seems to indicate that she can only win the case through tricks and feminine wiles. In short, the film claims that women are the equal of men—a fine sentiment—and then essentially claims that women must resort to tricks, to crying, to acting like a female stereotype to get what they want.

As the marriage appears to break up, though, Adam confronts Amanda in Kip’s apartment as Kip tries to get her drunk and put the moves on her. In what is justifiably the most famous scene in the film, Adam threatens them both with a gun (as with the original court case) until he gets Amanda to admit that no one really has the right to break the law, man or woman. And then Adam puts the gun in his mouth and bites off the end, since the pistol is actually made from licorice. It’s a cute moment.

And, of course, since this is a comedy, they don’t really split up. Adam cries as they divide their assets and she takes him back, and he tells her later that the tears weren’t real, but conjured up so that he could get what he wants.

This is a difficult film for me to judge. On the one hand, the obvious chemistry between the two stars is palpable and a great thing to watch. The two really do belong on the screen together. On the other hand, I simply can’t get around the fact that the film, while perhaps well meaning and ahead of its time in the sentiment of actual equality for women, seems to indicate the exact opposite of what it intends.

Final analysis? Not guilty by reason of mental defect. It doesn’t quite know what it wants to be, so it has two personalities.

Why to watch Adam’s Rib: Tracy and Hepburn. Why else?
Why not to watch: It shoots its own message in the foot.
Posted by SJHoneywell at 11:23 PM