And Then He Joined the Cast of The Simpsons 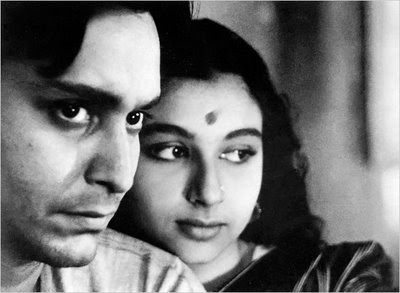 We rejoin Apu (Soumitra Chatterjee) as he finishes his studies. He has done well in school, and his professor would like him to continue to study, but Apu simply can’t afford it. He takes low-paying jobs as a tutor, for which he is paid not quite enough to live on, considering his rent is months past due. Still, he is working on a vaguely autobiographical novel, and is happy in his work. He is overjoyed when his friend Pulu (Swapan Mukherjee) shows up out of the blue.

Over dinner, Pulu invites Apu to his cousin’s wedding out in the middle of nowhere. Having really nothing better to do, Apu decides to go. It proves to be a momentous decision. The bridegroom loses his marbles before the wedding, and thus the ceremony cannot go through. The girl, Aparna (Sharmila Tagore) must find someone to marry her before the appointed time ends, or she is destined to go through life unmarried. Apu, always one for the grand gesture and the romantic ideal, is coerced to step in and marry the girl, and he takes her back to Calcutta.

Things start off rocky between the couple, but it soon becomes evident that a very deep love develops between them despite their poverty. Aparna is at first resentful of Apu’s meager surroundings and lifestyle, but comes to love him, and she becomes the focus of his world, telling her that since their marriage, he has not worked on his novel because she means more to him than it does. Eventually, Aparna becomes pregnant and returns home to her parents to have the baby.

But, since this is Apu we’re talking about, it’s evident that things are going to go badly. The minute things start to look good for Apu, the waves come crashing in on him. Aparna dies giving birth to a son named Kajal (played eventually by Alok Chakravarty).

Apu handles this news badly, and essentially abandons his life and his child. He wanders, destroying his novel on the way, and settles in another part of the country. He has dreams of leaving India altogether to be away from any responsibilities he might have. Kajal, in the meantime, grows into a nasty little kid who plays dirty tricks on everyone around him. Apu sends money when he can, but never visits the boy and doesn’t even know his son’s name.

Naturally it falls to Pulu to come to the rescue once again and provide the moral guidance that Apu sorely needs. He is convinced to go and visit his son despite Apu’s words that he can barely just send the money for the boy’s care. Since the boy’s birth killed Aparna, Apu wants nothing to do with him. But he goes, and the last 20 minutes or so of the film concern what happens when Apu finally sees the child he fathered.

The film, and ultimately the entire trilogy, is essentially about not the meaning of life, but the purpose of life. Apu, despite the upbringing from his priest father and his intensive education, and despite his obvious gifts as a poet and writer, has lost his way. The death of Aparna cause him to lose his moral compass. It is the successful Pulu who is in many ways the moral core of the film, as it is he who goads Apu into the marriage to protect his cousin, and it is he who upbraids Apu to perform his duties as a father and to at least visit the son he has abandoned.

Honestly, I didn’t like the death of Aparna. She was my favorite part of the film. I’d have rather had Apu die than her, because she brought a palpable lightness to the film, an air of confidence and strength that I found reassuring and wonderful. Certainly killing her off advances the plot, and is necessary to get Apu to reach the conclusion of his own story, but that doesn’t mean I have to like it.

Apur Sansar is a real and realistic film, which is what makes it so powerful. These are normal people, and they look normal. They aren’t mind-alteringly attractive, powerful, or wealthy. Most of the time, they are simply trying to survive from one day to the next. This sort of struggle is difficult to watch, but is certainly compelling. I can’t honestly say I enjoyed this film, but it marks an interesting place in the cinematic world. Like many an acclaimed film or series, it is much easier to respect than it is to really like.

Why to watch Apur Sansar: It’s the conclusion of Ray’s Apu Trilogy.
Why not to watch: Apu’s life still pretty much solidly sucks.
Posted by SJHoneywell at 11:56 PM