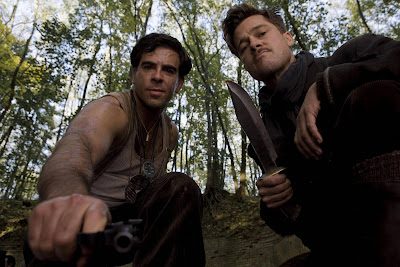 Ask most Americans how they spend the Fourth of July, and the majority will probably include barbecue, beer, and fireworks. I love barbecue and fireworks; I’m not that much of a drinker. So instead of beer, I’m substituting watching a film that glorifies the horrible slaughter of enemies of the American people and the world: Nazis. A few days ago, watching Das Boot, I was seeing German sailors not as enemies, but simply as men. That changes in a film like Inglourious Basterds in which Germans are essentially their 1940s propaganda counterparts, suitable mainly for extermination.

In the modern age of film, admitting that you aren’t a Tarantino fan is sort of like saying you don’t like coffee. Well, I don’t like either. Coffee tastes like ass, and Tarantino’s films always feel to self-referential to me. He likes his dialogue a lot and likes to show off his knowledge of obscure things. There seems to be a part of Tarantino that can’t resist demonstrating the sort of obscure knowledge he carries around in his cranium so that his fanbase can titter about just how awesome Tarantino really is.

So it was mildly surprising to me that Inglourious Basterds doesn’t contain much in this respect. It’s essentially a dark, violent fairy tale, even starting with the words “Once upon a time” before it gets into the meat of the story. Here we have a few stories that all converge on the same point, leading to a fiery, explosive conclusion.

For one story, we have SS Colonel Landa (Christoph Waltz), who has recently been given the task of rounding up all of the Jews still in France and sending them off to concentration camps. We see him in action at the start, brutally slaughtering a French Jewish family hiding out on a dairy farm. One member of the family, a daughter named Shoshanna (Melanie Laurent) escapes, and naturally this will become important later.

A second story concerns a group of American Jews who have been airdropped into France. Nicknamed “The Basterds” by the Germans, this group scours the countryside slaughtering every German soldier they can find. Their leader, Aldo Raines (Brad Pitt), has demanded a bounty of 100 Nazi scalps from each man under his command, and thus his soldiers do scalp their kills. The idea is to put incredible fear into the German troops and wear on their morale, and kill as many of them as possible. Included in the group are a couple of German-born Jews who defected to America and signed up to kill their former countrymen.

A third story concerns the premiere of a new propaganda film. This film concerns the exploits of a German sniper who single-handedly fended off an enemy column by killing several hundred enemies over the course of a couple of days. The private in question, Fredrick Zoller (Daniel Bruhl) becomes entranced with the owner of a small cinema in Paris, and he demands that the premiere be held there. Of course, as it turns out, the owner of the cinema is none other than Shoshanna from the start of the film.

With the premiere of this film involving many members of the German High Command, the British decide to take a whack and getting rid of many “rotten eggs in one basket,” sending in a British expert on German film to infiltrate the showing and blow everything to hell. This man, Archie Hicox (Michael Fassbender) is to meet up with the Basterds and then a German double agent—a famous German actress named Bridget von Hammersmark (Diane Kruger).

Death, blood, explosions, and all manner of insanity ensue.

I was prepared to dislike this film, but found that I couldn’t. I already don’t love Tarantino in general, and there’s an additional reason for this not mentioned above. When he first hit, I loved his work and thought he might be a genius. And after Pulp Fiction…he didn’t do anything. It was as if he did nothing but believe his own press and rest on his laurels, and I really started to not give a crap about him. Compound that with the fact that one of the actors in this film is Hostel director Eli Roth, and you get a collection of things that really don’t interest me at all.

And yet this film has a peculiar manic energy to it. It’s bloody like all Tarantino movies, violent and disturbing in places, and with a strange humor in other spots. Landa is such a complete prick that it’s impossible not to hate him, and yet played so well that it’s impossible not to enjoy having him on the screen. The film slows down in parts—particularly the sections regarding the film premiere—and is far better and more interesting when we are dealing with Brad Pitt and his crew.

So it turns out I liked this film, save for one enormous ego-stroking dick move pulled by Tarantino at the very end. I’ll put this under a spoiler tag.

It goes to show that the movie really is the thing, and even someone who appears to be out of surprises can still surprise us.

Why to watch Inglourious Basterds: Quality, splattery death.
Why not to watch: Tarantino’s biggest dick move.
Posted by SJHoneywell at 11:52 PM