A Different Kind of Memento 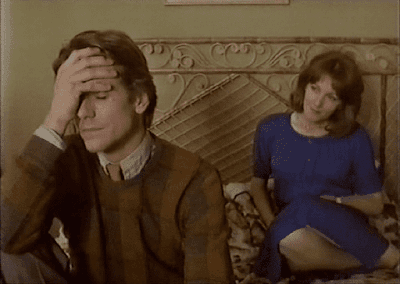 When Memento came out, a lot of the film world was taken with the idea that the story was told in reverse. The appropriately named Irreversible was told the same way, and again audiences wondered at the guts of telling a story this way. And here we have the little-known Betrayal from 1983. This movie is based on a Harold Pinter play of the same name and, as you’ve probably guessed, tells the story in reverse order.

So why is this forgotten as a film that tells the story this way? It might because while it is filled with the sort of pathos and drama that we expect from a Pinter play, it doesn’t have the same sort of gut punch of Memento or the pure horror of parts of Irreversible. Instead, it’s the story of an affair told from years after the affair has ended, moving backwards in time to the end of the affair, the reveal of the affair to one of the spouses, shared afternoons, and tentative beginnings. It’s an interesting way to tell the story and seems initially to be more than simply a narrative trick. It does, however, require the viewer to pay close attention. We know where the affair is going because we’re seeing it in reverse. We need to remember that frequently what we know is not known by all of the characters on the screen.

We’re periodically reminded of these time switches. Intertitles pop up at the end of a sequence saying “Two Years Earlier” or something similar. Each time this happens requires a mental shift, knowing what is to come but essentially forgetting what we know to see the people in the moment of the story.

Rather than go through the entire story, I’ll offer you the basics. Literary agent Jerry (Jeremy Irons) has a seven-year affair with Emma (Patricia Hodge), a gallery owner who happens to be the wife of publisher Robert (Ben Kingsley), who happens to be Jerry’s best friend. The movie starts several years after the affair has concluded. Jerry and Emma meet up and she tells him that while they were having an affair, Robert has had a series of his own affairs. In the course of the conversation and their marriage breaking up, she has admitted everything to her husband. We then find out that this is a lie; Robert has known for years.

The story being told this way is fascinating in the sense that in scenes we would take at face value in a more standard film, we go in with knowledge that we wouldn’t have otherwise had, putting a very different spin on how we view the scene. We find out, as I mentioned, that Robert knew of the affair years earlier. We then jump to a few years earlier and see Emma admit the affair to Robert while they are in Venice. Back from the trip, Robert has lunch with Jerry. Told in order, we wouldn’t know anything. Told in reverse, we know that Robert knows of the affair, and it explains his behavior during the meal.

Betrayal is very much a performance movie, with the three central performances being more or less the entire drama. There are a few other small parts, but none of real note outside of the particular triangle in question. It’s a good reminder that Jeremy Irons was a fine actor before he essentially went Nicolas Cage and started taking every role that was offered to him. It’s also interesting to see what Ben Kingsley did literally the year after he won an Oscar and before he started taking every role that was offered him. It’s Patricia Hodge who I didn’t know as an actor, and she manages to stand up to both Irons and Kingsley at points in their careers when they weren’t doing a lot wrong. That says a lot for her.

But for all of the fancy reverse storytelling, Betrayal is a pretty standard story. In fact, told in the right order, it’s nothing that special at all. Two people have an affair, the affair ends, and their lives drift apart. Roll credits. The reversed nature of the narrative does make it more interesting in that respect, but it feels like a trick.

The biggest disappointment for me is something that frequently happens with filmed stage dramas. This looks like a filmed stage drama. There’s not much here aside from changing camera angles that couldn’t have been done on stage. It looks very much like its source material in that respect, and that’s always a little disappointing to me.

Still, Pinter’s work is not easily shrugged off. I’m not sure this is a film that needs to be watched a second time, but for anyone interested in narrative structure, it’s interesting to see something before Memento and Irreversible that took the same narrative risk.

Why to watch Betrayal A great cast and a Pinter script.
Why not to watch: It’s clearly a filmed stage play.