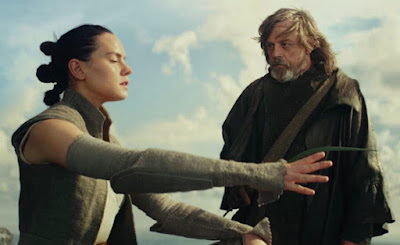 Not going to the theater that often means that I don’t tend see the big movies when everyone else does. That being the case, I’m probably the last person who comes to this blog to see Star Wars Episode VIII: The Last Jedi. I didn’t really know what to expect. After all, this is the Star Wars movie that caused a small part of the fan base to so completely lose its collective shit that they demanded an immediate remake.

I need to talk about this, about the toxic fandom that seems to exist more and more. Honestly, I don’t know if that’s absolutely true. Toxic fandom has probably always existed; in the age of the internet, it simply has more of a platform. And here’s the thing—in a lot of respects, that toxic fandom looks a lot like a younger version of me. I don’t mean that I acted like they do when I was younger, but I fit the stereotype. I was (and still am a little) a huge Star Wars fan as a kid. I’m white and male, and I’m also a nerd. There but for the grace of social skills and being raised by non-shitty parents go I.

The truth is that I’m not going to spend a great deal of time going through the plot here. Chances are close to 100% that you’ve already seen this at least once. It’s also slightly possible that you haven’t seen it, and even though it’s been months since the movie’s release, I’m not going to be the guy who spoils it. Let’s just say that it picks up where The Force Awakens left off, bringing back pretty much the entire cast and adding a few new people. Notable in these additions is Kelly Marie Tran as rebel Rose Tico and Laura Dern as Vice Admiral Holdo.

Kelly Marie Tran is one of the reasons I really need to address the idea of toxic fandom in general, and this specific toxic fandom in particular. Tran deleted her Instagram account and all of the associated pictures because of near-constant harassment by Star Wars fans who evidently feel entitled to have everything the way they want it. So let’s review for a second about what seems to be the problem.

The problem, in a nutshell, is women, at least according to the people who have a problem with The Last Jedi. Minor spoiler warning here (no specifics): one of the main plot points of The Last Jedi is that the men in the movie frequently screw things up, forcing the women to put things right. One of our heroic characters from The Force Awakens becomes pretty much a petulant child in this, acting rashly and stupidly over and over again while the clear-headed and calm women in command save the day.

Back in the day, the heroes in the Star Wars universe were Luke (white guy), Han (white guy), Leia (white woman), Lando (black guy), and Chewie (dog-gorilla made of awesome). Even most of the supporting characters were white guys—Ben Kenobi, Wedge Antilles…and ultimately Darth Vader was played by a white guy despite being voiced by James Earl Jones. And now our heroes are decidedly less white and decidedly less male, and there are some spoiled rotten fans who can’t quite handle the fact that they don’t see themselves represented in every notable character on the screen.

They can form a giant conga line and kiss my ass.

Now, that said, The Last Jedi isn’t a perfect movie. There are a few real problems with it that need to be brought up. The first is that it’s terribly long. This movie runs just over 150 minutes, and it doesn’t need to be nearly that long. It just keeps going and going. There was a time in my life when I would have been overjoyed at the constant parade of more and more action sequences, but here, I feel like we could have excised 20-30 minutes without losing a great deal.

Second, several of the characters are badly misused. I like the new additions, including the rather surprising casting choice of Benicio del Toro as a criminal hacker. Two characters who were in the previous movie appear here and are criminally underused. The first is Maz Kanata, who appears only for a few minutes as a projected hologram. The second is silver-armored General Phasma who suffers from Boba Fett-level misuse in this film.

So The Last Jedi isn’t a perfect film, but it is a pretty good one. I like a lot of it, and I like how it ends a great deal. I think this was evidently something else that people seemed to dislike about the film, but it’s the ending the film really needs. It’s one of the best and most interesting uses of the Force in any of the Star Wars films, and it’s entirely in keeping with the character in question.

Final analysis? It’s no Empire Strikes Back, but it’s also no Phantom Menace.

Why to watch Star Wars Episode VIII: The Last Jedi: C’mon, like you need a reason.
Why not to watch: Toxic fans suck.