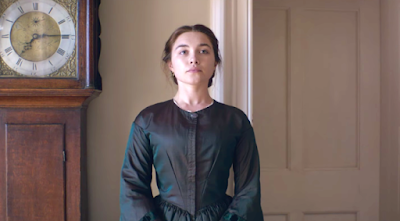 There are times when I have to shake my head at the summaries provided about films. Take, for instance, newcomer to the 1001 Movies, Lady Macbeth. According to IMDb, the plot is as follows: “In 19th-century rural England, a young bride who has been sold into marriage discovers an unstoppable desire within herself as she enters into an affair with a worker on her estate.” And here’s the thing—that’s technically true in terms of what this movie is about, and also about as far from the actual story as can be believed. Lady Macbeth is a hard core story of a woman placed in a terrible situation deciding to fight back with every weapon in her arsenal including a true viciousness, a ruthless quest for revenge, and the sort of callousness rarely seen outside of a prison camp.

Katherine (Florence Pugh) is forced into a loveless marriage with a man much older than she is in 19th century England. Her life changes immediately, and not for the better. Her father-in-law Boris (Christopher Fairbank) is of the mindset that Katherine’s job is to pop out heirs for his son at every possible opportunity. This is difficult for her because her husband Alexander (Paul Hilton) seems more interested in looking at her naked body than doing much in terms of producing a scion. In any event, she’s not supposed to leave the house, and her world becomes one of pure boredom.

Alexander is sent away on business at one point and Boris leaves as well, putting Katherine in charge of the house and on her own. She uses this opportunity to explore the grounds and discovers at one point a number of the farmhands harassing Anna (Naomi Ackie), her personal maid. Katherine finds her attracted to Sebastian (Cosmo Jarvis), one of the farmhands, and it’s not long before Sebastian is more or less living in the house as the lord of the manor. With both her husband and father-in-law gone, Katherine becomes emboldened, not really caring that others in the household know about her affair with Sebastian.

But hey, this isn’t called Lady Macbeth because she’s humping the servant. When Boris returns, we have our first confrontation. He’s aware of the affair between Katherine and Sebastian, and takes the opportunity to beat Sebastian almost to death and to berate his daughter-in-law about her conduct. Katherine responds by coldly poisoning Boris’s food and calmly listening to him choke and strangle before continuing on with her life. We’ll get similar instances when Alexander returns home, each instance of murder further emboldening Katherine into living her life the way she wants.

As we move into the third act, life in the manor changes once again. Agnes (Golda Rosheuvel) arrives with her grandson Teddy (Anton Palmer), claiming that the boy is the result of a relationship of her now-deceased daughter and Katherine’s husband Alexander. In fact, she has papers claiming the same thing. Katherine discovers that she has motherly feelings toward the young boy, which puts a wedge between her and Sebastian, and leads to the shocking conclusion and one of the coldest moments on film of the last 10 years followed by an equally cold moment to round out the end of the film.

It is one of these closing moments that I had the most problem with, not because of its pure cruelty but because I found it difficult to parse with the characters. On this rewatch, it made a great deal more sense to me—perhaps I wasn’t paying full attention the first time.

Lady Macbeth is one of those movies that is disturbingly fascinating. It is slow, but the plot progresses constantly and inevitably toward its terrible climax. The brilliance of the plot is that the ending, shocking if known at the start of the film, makes perfect sense in terms of the characters once we have seen the progression of these characters’ development. In retrospect (and in the moment), this end is terrible, but it makes sense. Viewed later, it’s so shocking that we might well wonder how easily we accepted it in the course of the film’s running.

While the story is good, it’s nothing without the lead performance of Florence Pugh. The story requires Pugh to be pitiable at the beginning, almost admirable or at least relatable through the middle of the film, and truly terrible in the third act, and she pulls this off without seeming to have to work hard at it. This is not a suggestion that she didn’t work hard; I think she did. I think she put so much work into the role that it looks effortless.

Needless to say, Lady Macbeth is not a pleasant movie by any stretch. I had watched this early in the year, and I wasn’t particularly keen on watching it a second time based on the story and the way that the film works. And yet I think I liked, or at least respected and understood, it more on this second viewing. It’s not a film to enjoy, but it is one that is fully worth experiencing.

Why to watch Lady Macbeth: Katherine is a stone-cold pimp.
Why not to watch: There’s a moment here that is difficult to parse with the story.

Posted by SJHoneywell at 1:44 PM