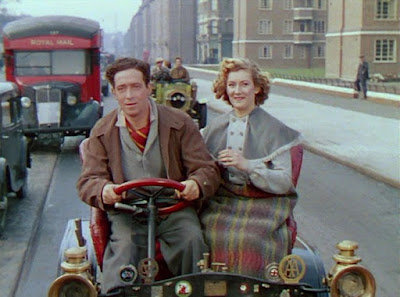 There are multiple genres that seem to be on Oscar’s shitlist. Horror, fantasy, and science fiction tend to be ignored—although that’s happening less over the last couple of years. Comedy is also a bit of a redheaded stepchild when it comes to Oscar nominations. There seems to be a feeling that comedy is somehow easy or unimportant when it’s been demonstrated over and over that comedy can be much more challenging and difficult than drama. So it’s always refreshing to see a film like Genevieve swing a nomination.

This is a pretty simple movie, and there’s not a great deal of plot here. In fact, the plot doesn’t really start until the film is about halfway done. Genevieve is the story of two couples. Alan (John Gregson) and Wendy McKim (Dinah Sheridan) have been married for about three years. Alan’s passion is his old car. When I say he has an old car, I mean it; Alan drives a 1904 Darracq. This is a car old enough that everyone in it sits in the open air. Alan has to crank it to start it. Look at the picture. That’s Alan and Wendy, and the car they are in is the eponymous Genevieve.

Every year, Alan and Wendy take part in the annual London to Brighton vintage car rally. People hop into their ancient cars and drive to Brighton, have a big, fancy dinner, and then drive home the next day. Also attending every year is Ambrose Claverhouse (Kenneth More), who has a different girlfriend every year. This year, it’s a model named Rosalind Peters (Kay Kendall). There are a couple of important plot points here. The first is that Ambrose introduced Alan and Wendy, specifically because Alan took Wendy on the rally several years earlier. This, we eventually learn has bothered Alan, who suspects that Ambrose may have more knowledge of Wendy than he is comfortable with. The second is that while Alan and Ambrose are friends, they look at each other’s cars with a great deal of scorn. Ambrose thinks Alan’s Darracq is moments away from the scrap heap while Alan thinks Ambrose’s 1905 Spyker is equally worthy of junking.

The first section of the film concerns the trip to Brighton. Wendy doesn’t want to go, but consents to go anyway. Both Alan and Ambrose have a series of failures. This culminates with Alan’s steering going out and Ambrose simply laughing at him and driving on despite having the right tools to fix the car. Alan and Wendy show up late, missing the dinner and forced to stay in a rather pitiful and noisy hotel. A lovers’ spat between the two causes Alan to go down to the garage to work on Genevieve where he encounters Ambrose. The two argue and eventually make a bet about who will get to London first. This is despite the expressed rule against gambling in the vintage car group; getting caught would get them both expelled from the group.

I won’t go into the trip back, because this is where a great deal of the fun of Genevieve happens. Suffice to say that Alan and Ambrose, desperate to win (Alan especially, since he has wagered roughly 2/3 of his and Wendy’s bank account) sabotage each other at every opportunity. Meanwhile, Wendy and Rosalind shake their heads and wonder both privately and collectively why the two men in their lives act like children.

The biggest problem with Genevieve happens to also be its greatest strength. There is very little plot here. There doesn’t need to be a lot of plot, though. The entirety of the film is the slow reveal of what we know about these characters and the competition between Alan and Ambrose. We don’t know about Ambrose taking Wendy on the drive until it is revealed to us past the midpoint of the film, and yet that fact drives a great deal of the competitive anger between the two men.

And really, this is what makes Genevieve work as well as it does. This is a restrained comedy, and because of it, it’s one that works really well. One of the problems that often crops up in comedies is that the situations depicted are ridiculous and unrealistic. We’re given extreme situations with the thought that the more extreme the situation, the funnier it must be. The opposite is actually true. What makes Genevieve funny is the fact that all of the problems that crop up are completely prosaic. Alan’s jealousy is completely understandable. We know that it’s unfounded (Wendy reminds Ambrose that she locked him out of her room all night), but she refuses to tell Alan because of the way he’s acted. That’s believable and relatable, and because of it, the scenes and the characters work.

Like many a comedy, Genevieve is the sort of film that isn’t going to change anyone’s life. It’s entirely charming, though. It’s a harmless 86 minutes with some very good, funny moments. It’s also a rare film that is pretty much exactly the length it should be. It doesn’t overstay its welcome, and because of that, never risks becoming stale or unfunny.

Why to watch Genevieve: It’s funny in just the right way.
Why not to watch: There’s not a great deal of plot here.