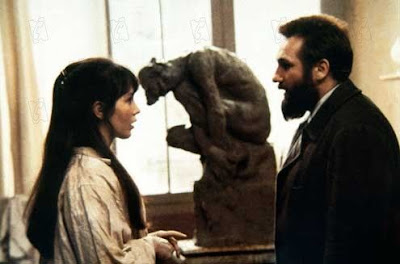 Every now and then I mention how much I enjoy it when someone goes against type. Seeing Tom Cruise play a villain, for instance, or having Alan Rickman play a romantic hero in Pride and Prejudice is always fun. And yet there are reasons that some people are typecast and play similar roles over and over. Isabelle Adjani is a case in point. While she is certainly a capable actress, she’s at her best playing crazy. Films like Possession and The Story of Adele H are a case in point, but Camille Claudel might well be the centerpiece of that fact.

Camille Claudel was a sculptor who began her career as a sort of protégé of Auguste Rodin. This was in a time when women simply weren’t artists. In saying that, it’s important to remember that Camille Claudel didn’t live centuries ago. She died in 1943, which means both of my parents were alive when she was. Rodin was (according to my very limited art knowledge) the last of the great realistic sculptors. Because of that, I always assume he was pre-Impressionist, but he absolutely was not.

The story begins and we are introduced to Camille (Isabelle Adjani) and her family. There are three people in her family who will be important. The first is her brother Paul (Laurent Grevill), who has aspirations of being both a poet and a diplomat, twin ambitions he will eventually fulfill. Second is her father, Louis-Prosper (Alain Cuny), who is convinced of her genius and is supportive to the point of doting. Third is her mother, Louise-Athanaise (Madeleine Robinson), who is constantly shocked by her daughter and embarrassed by everything she does. This is not played for comedy; there’s some evidence here that Camille’s eventual mental illness stems in part from the constant berating and emotional abuse she endures from her mother.

Camille loves to sculpt, and seeks out Auguste Rodin (Gerard Depardieu) to take lessons from him. He arrives to see her work and leaves quickly. However, it’s clear that he is impressed, since he takes on Camille not as a student initially but as a worker. See, Rodin has become something of an industry, and has workers accomplish a great deal of his actual work for him. This is Camille’s job, but she eventually catches his notice again and he takes her under his wing.

Essentially, the two decide that he may not have a great deal to teach her. Bonded by their past that contained a non-supportive parent and their love of art, the two begin an intense, torrid affair that raises a lot of eyebrows. Since Camille will soon realize that she has any number of rivals for Rodin’s affection, there is additional fuel for what will become her splintering mental stability.

Camille, while not really diagnosed in the film, is essentially a paranoid schizophrenic. She is convinced that Rodin wants to destroy her career. In fairness, based on the film, she does have some clear evidence for that position; he sees a work in progress as an attack on him personally and demands that she run all of her ideas past him so that he is not humiliated by her. However, in truth he is her biggest supporter, aiding her and her reputation when he can. She doesn’t ever really believe this, though, and soon spirals into full-blown paranoia and mania. While she continues to produce work, she locks herself away and gives in to paranoid ranting and dark flights of fancy. Nothing anyone does seems to help her. Admittedly, her behavior doe cause a lot of people to discount her work, but no more do so for that reason than the fact that she is a woman attempting to play in what is seen as a man’s playground.

In more modern years, Gerard Depardieu has achieved Baron Harkonnen-like mass, potentially attracting small planetoids that circle his bulk. It’s easy to forget that 30 years ago, he was legitimately a romantic lead. Depardieu handles the role of Rodin well, but he’s never the focus of a scene or a moment. It’s an interesting performance in that respect. He’s playing someone who is more or less an egotist, but is playing him as a secondary player. It’s well done.

But for all that, this is all about Isabelle Adjani, who is always the focus of every moment she is on the screen. Adjani has a great deal of experience playing characters sliding into madness, which likely means that slipping into the role of Claudel might have been almost comfortable. She is great here in every moment, believably insane. What I mean by that is that she isn’t movie-crazy. While there are moments of histrionics, it’s generally far more subtle than that. There’s something off about her that is palpable but difficult to name. It’s also interesting to me that she looks exactly the same as she did almost a decade earlier in Possession.

Camille Claudel is too long for the story it wants to tell, though. There’s probably 20-30 minutes here that could be slipped out of this without a great deal of loss. That said, I was never bored watching, so that goes a long way.

Why to watch Camille Claudel: Isabelle Adjani makes the best crazy.
Why not to watch: It’s a good 30 minutes longer than it needs to be.