Film: ’Round Midnight
Format: DVD from NetFlix on The New Portable. 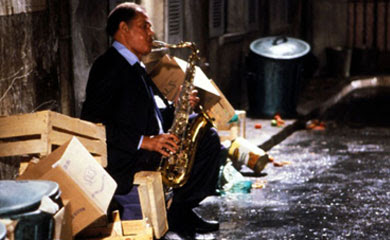 I always wonder about those cases where someone is Oscar nominated in a debut. Dexter Gordon swung an Oscar nomination for a role where he more or less played himself. It was his first starring role and his first lead role as well as his first role in a feature-length film. This is because Dexter Gordon was not an actor; he was a jazz saxophonist. He happens to be incredibly influential as a jazz saxophonist, but that’s neither here nor there. There’s a part of me that views his work in ’Round Midnight much the same as I view Marlee Matlin’s role in Children of a Lesser God, although I like this movie a lot more.

In the 1950s, Dale Turner (Dexter Gordon) is a talented and influential jazz saxophonist (see what I mean about him playing himself?) who is troubled, to say the least. His main troubles are alcohol and drugs. Wanting to get something like a fresh start, he decides to go to Paris where he played years ago in the jazz heyday. The goal is to play at the Blue Note, more or less under the control of Buttercup (Sandra Reaves-Phillips), who will keep him on the straight-and-narrow until he has cleaned up. So off he goes, unable to get the drink he wants (he’s been cut off pre-emptively at the club), but playing again and playing well.

Enter Francis (Francois Cluzet), an artist who makes posters for movies in Paris. Francis is divorced, but has custody of Berangere (Gabrielle Haker), his adolescent daughter. Francis is not going to win any Father of the Year contests any time soon. He puts his daughter to bed and then heads out to jazz clubs. Actually, when Dale is playing, he hangs around outside, crammed next to a window to listen because he can’t afford to go in. He does this despite the fact that Berangere wakes up at night and looks for him. Eventually, Francis hangs around long enough to meet Dale and buy him some ill-advised drinks.

Dale doesn’t do well when he has a little bit of money, going on binges and waking up in hospitals. Eventually, Francis decides to more or less take over watching out for the musician, moving Dale in with him and his daughter. Eventually, Dale decides that he wants to clean himself up. He stops drinking, gets a bit closer to Berangere as a sort of putative grandfather or uncle, and continues to play well. He even starts writing music again and recording. Eventually, he decides he is clean enough to return to New York. Francis goes with him, and, back in his old environment, all of Dale’s bad acquaintances and dealers start coming around again.

There are a few joys contained in ’Round Midnight. One is that when Dale and Francis show up in New York, we meet Dale’s agent, played by Martin Scorsese. The other joy, and it is the supreme joy of this film, is the music. Dexter Gordon did not with the Oscar for Best Actor, but Herbie Hancock did win one for the score, and he absolutely should have; the score is tremendous. Say what you will about Dexter Gordon, this role wasn’t a huge stretch for him.

The truth is that I don’t know what Dexter Gordon was like in real life. I don’t know if he had a drinking problem or loved heroin and pills. If he was generally clean, the only difference between him and Dale Turner is his addictions. Otherwise, there’s not much difference between them at all. It’s easy to say that Gordon looks and even sounds exactly like you’d expect a jazz legend to look and sound. That deep, raspy voice is exactly what we think Dale Turner should sound like. And yet, that’s because Dexter Gordon was a jazz legend, and so he sounds like he sounded. He looks great playing the sax, too…because he was a saxophone player.

Ultimately, I don’t know how much this is a movie that I think is that interesting or even that good. It’s fine for what it is. Dale is perhaps the most interesting character on the screen, but he’s not really that interesting when he’s not on stage. Francis is someone we’re probably supposed to like and see as sympathetic, and yet he’s a terrible father, constantly abandoning his daughter to follow around a musician he has no real connection to other than being a fan.

What it comes down to is that the music is pretty great. Dexter Gordon was a hell of a musician, and this film is a showcase for his musical talent. Beyond that, I think you’re genuinely better served to find the soundtrack and listen to that rather than go to too much effort to track this down.

Why to watch ’Round Midnight: The music, plain and simple.
Why not to watch: How much effort is really here?