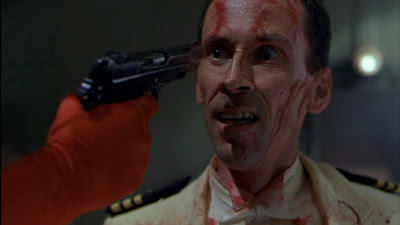 There are certain expectations with a horror movie. I know that there are going to be characters who do exactly the wrong thing at exactly the wrong time, and that this is going to get them killed. Sometimes, a good filmmaker or a very good script can make that work. Most of the time, though, we in the audience look at the characters acting like idiots and realize that they’re acting that way because the story needs them to, or because it’s going to allow for them to be killed in spectacular fashion. No movie exemplifies this better than 2002’s Ghost Ship.

We start in 1962 aboard the ocean liner Antonia Graza where a party is going on. While members of the crew and passengers dance, we see sinister actions as a cable snaps across the dance floor, bisecting everyone but a single young girl. Yes, this is shown in graphic detail as blood starts to drip and people fall down in pieces. It’s seriously one of the best openings of a horror movie I’ve seen.

Cut to the film’s present day and we’re introduced to a salvage crew who are bringing in a ship to earn a reward for whatever is on board. The crew consists of Captain Murphy (Gabriel Byrne), co-owner of the ship Epps (Julianna Margulies), and the rest of the crew. These are Dodge (Ron Eldard), Greer (Isaiah Washington), Santos (Alex Dimitriades), and Munder (Karl Urban). While the crew celebrates their latest find, they are approached by a man named Ferriman (Desmond Harrington). He tells them that he’s spotted a massive ship adrift in the Bering Sea. After a short negotiation, the crew agrees to go, but Ferriman insists on coming with them.

So they go to the ship, and it won’t be a surprise (given the name of the film) that this is a haunted ship, and weird stuff is going to start happening right away. It’s already hinky since Antonia Graza has been missing for forty years. There’s evidence that other people have been on the ship recently, and several members of the crew are going to start having visions of the original passengers. True to form for this sort of film, the crew is going to be whittle down one by one until we get to the final battle between the last remaining character and the evil that inhabits the ship.

The problem with Ghost Ship is that it requires every single person in the movie to be so incredibly stupid that they need instructions to keep breathing. For instance, while walking through the ship, Greer enters the ship’s ballroom and it more or less returns to its original splendor while he is watching, and the people aboard the ship suddenly appear to him. One of those people is Francesca (Francesca Rettondini), the singer who was performing on the original liner. So here’s the situation: you’re on a derelict ship that has been abandoned for 40 years. People have been having visions of the past crew and passengers, all of whom disappeared as far as the world knows. Another member of your crew has found the bodies of another salvage crew that had evidently been here and died in the last month. And now you’re having a full-blown hallucination. When that hallucination starts disrobing and motioning for you to follow her, would you? Can you guess what Greer does?

Here’s another example. Dodge and Munder find themselves in the galley. Again, remember that this ship has been missing for 40 years. They open food cans left in the kitchen for four decades and start eating it. This food, which is almost certainly gone horribly bad and is likely laden with botulism seems good to them and they eat it. How stupid do they genuinely have to be for that to make any sense?

Every single character with the possible exception of Santos acts in almost exactly the same way regarding their interaction with the characters they meet on the ship and the hallucinations they have. They are all incredibly stupid because the plot demands it when there are much better ways for us to get to the ending and the various points the film wants to get to without making just about everyone in the film appear brain damaged.

It’s a damn shame, because Ghost Ship absolutely wastes the two best things about it. The opening couple of minutes is seriously fantastic. It’s one of the best horror movie openings I’ve ever seen, right up there with Black Sunday. The second is a surprising cast for a B-level horror movie.

There’s a good movie in here somewhere, and more specifically there’s a very good horror movie in here. The problem is that Ghost Ship has such a ridiculous execution and such a stupid screenplay that anything that might be good here is wasted in service to a film that requires everyone in it and everyone watching it turn off their brains. Such a damn shame.

Why to watch Ghost Ship: Seriously, one of the greatest horror film openings you’re going to find.
Why not to watch: Everyone in this film is incredibly stupid.