Off Script: The Crow

Film: The Crow
Format: DVD from Cortland Public Library on The New Portable. 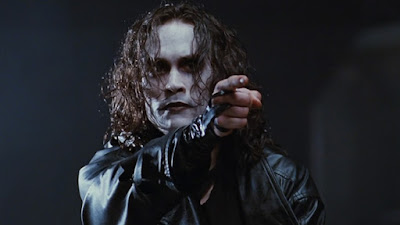 There are weird moments when art imitates life and other weird moments where there are simply strange parallels. The Crow is one of those. The thing that most people remember about this movie is that it was the movie that caused the death of Brandon Lee, son of Bruce Lee. The parallel is that the character Lee plays is a revenant, essentially a corporeal spirit that has returned from the dead to wreak vengeance on those who deserve it. It would have easily been a star-making vehicle for Lee. It was one of the first important comic book movies, and more or less the first non-Marvel/DC title based on a comic book that got any sort of critical acclaim (although The Rocketeer could be argued for that).

Our story is dead simple, which is part of the reason it works as well as it does. Rocker Eric Draven (Lee) and his fiancée Shelly Webster (Sofia Shinas) are attacked the night before their wedding, which also happens to be the night before Halloween. Shelly is an activist who has been organizing, and is targeted by a criminal gang. During the attack, Eric shows up and is both shot and pushed out a sixth floor window. According to legend, crows carry the souls of the departed to the land of the dead, but when a terrible wrong has happened, the crow can bring the soul back. So, guess what happens. A year to the day after his death, Eric Draven reanimates his body, which apparently hasn’t gone through any decomposition. And now that he’s back, he’s going to track down everyone who killed him and killed Shelly.

Eric arrives, paints his face, and tracks down his attackers, discovering that he is essentially unkillable; bullet wounds heal up immediately. One by one, he hunts down Tin Tin (Laurence Mason), Funboy (Michael Massee), T-Bird (David Patrick Kelly, unrecognizable to me except that his voice is a dead giveaway), and Skank (Angel David). As he does this, he’ll discover that the real power behind the criminal throne is Top Dollar (Michael Wincott), assisted by his half-sister/lover Myca (Bai Ling) and his main henchman, Grange (Tony Todd).

Of course, we’re not done here. Funboy’s drug-addicted moll is Darla (Anna Levine), who is also the mother of Sarah (Rochelle Davis), who was sort of the ward of Eric and Shelly, since Darla is a drug addict. With Eric and Shelly gone, Sarah is more or less being raised by Albrecht (Ernie Hudson), a cop who investigated the deaths of Eric and Shelly. What this means is that before too long we’re going to have Eric’s reanimated body running into Sarah and Albrecht, who both seem to accept the fact of his reanimation without a great deal of trouble.

The issue I have with The Crow is that it seems to move too quickly in a lot of respects. There’s not quite enough meat here for a movie of this length. I didn’t honestly mind the length, but this feels like a 90-minute movie in a 102-minute bag. There’s a lot of unnecessary posturing here. We get several minutes of Eric in his abandoned apartment (one wonders why it wasn’t cleaned up and rented, since it was a sixth-story penthouse flat) reliving his death, for instance, and a lot of this isn’t necessary. Until the very end, there’s also very little at stake. Eric is more or less invulnerable, and while there are moments when the revenge is fun, this is a case of watching someone more or less play a video game in God Mode. Until the third act, which goes on longer than it needs to as well, there is literally no danger for Eric, and the story is just watching him steamroll over guys who can do nothing to stop him.

Despite this, The Crow has a lot going for it. Part of it is a really solid B-movie cast. In addition to David Patrick Kelly, Bai Ling, Anna Levine, Tony Todd, and the always-fun and easily underrated Ernie Hudson, we also get a few scenes of the great Jon Polito as a pawnshop owner.

But, of course, this is Brandon Lee’s movie. Lee could easily have been a major star, since The Crow demonstrated that he had the potential for a substantial screen presence. In a lot of scenes, Lee commands center stage despite not having a lot to work with as the character. Sure, it’s a histrionic performance in places, but I forgive a great deal here, since this was early in the comic book movie pantheon, and the comics themselves are frequently given to that sort of emotional extremism.

In truth, I avoided The Crow for years because of Brandon Lee’s death. It felt ghoulish in some ways to watch the film, and it still feels a bit like that to me now. Rather than feeling like a tribute to Lee, it feels tainted, as if liking it is somehow endorsing the tragedy that it encompassed. Is that going too far? It might be, and yet I can’t shake that feeling.

Why to watch The Crow: You owe it to Brandon Lee.
Why not to watch: It just feels ghoulish.