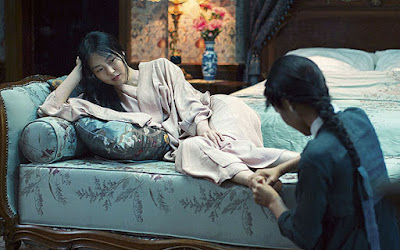 Styles in any sort of art will mutate and change over time. A case in point is the idea of film noir. Not many people are making films in black-and-white these days, which certainly means that one of the clear defining characteristics of the style isn’t present. However, there are still noir films being made. It’s also very much an American style, but like just about any other film style, it has been copied by other national cinemas. A clear case in point is The Handmaiden (also called Agassi), a film from Park Chan-wook from a couple of years ago. Partly in Korean and partly in Japanese, this is a film that manages to do quite a bit with its running time.

The Handmaiden is a film in three parts, and while each of the three parts tell essentially the same story with additional information, the three parts are also significantly different. Part One gives us the basics of the story; Part Two gives us the disturbing and frankly awful details. It’s Part Three that drops the hammer, though, tying everything up in completely unexpected ways.

While The Handmaiden could be placed in any number of film categories, the one in which it truly belongs is “erotic thriller.” Because of the “thriller” part of that label, I’m going to be cursory in terms of the plot. A young woman named Hideko (Min-hee Kim) lives with her uncle-by-marriage, Kouzuki (Jin-Woong Cho). Hideko’s aunt and blood relation killed herself years earlier. It is evident that Kouzuki would like to marry her, which is creepy as hell despite her not really being related to him. Enter Count Fujiwara (Jung-woo Ha), who comes to court Hideko on the sly. On the surface, he helps Kouzuki with his book selling business. Our fourth player is Sook-Hee (Tae-ri Kim), a servant hired to work with Hideko. In reality, she was hired by Fujiwara, who isn’t actually a count. He’s a conman, looking to run off with all of Hideko’s inheritance, which he will split with Sook-Hee, who has been trained as a criminal from birth.

I’m going to leave the plot summary there, and that doesn’t even cover the first part of the film. The Handmaiden is genuinely a film to go into as cold as possible in terms of the plot and where things are going to end up going. You want this to be filled with surprises; it’s not a film that has nearly the sort of power it should if it has been spoiled.

I feel lately like I have often been complaining about the lengths of films. The Handmaiden comes in at just under 150 minutes, and if it is too long, it is so only by a couple of minutes. I honestly could have lived without the last scene, which feels a hell of a lot more like fan service than it does a necessary part of the plot. However, the 145-minute running time works for a good 140 minutes, so I can forgive it being a touch over what is necessary.

The performances here are uniformly good, but The Handmaiden isn’t a film that really depends upon its performances. It’s all about the plot here, and the plot we are given is a doozy. It’s worth saying that this is a movie that you may have to force yourself to stay with. Divided into three parts, the first is interesting and surprising at the end and the third has a couple of disturbing moments but ties everything up beautifully. It’s the middle section that is the biggest issue. Like a great deal of Park Chan-wook’s work, there is a great deal here that is very disturbing, and not just because Kouzuki wants to marry his niece.

And I'm done with the 1001 Movies list once again.

Why to watch The Handmaiden: It’s twisty as all hell.
Why not to watch: The middle section is very difficult to get through.