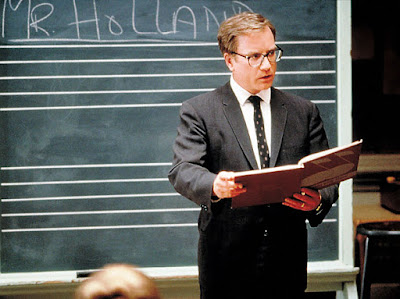 Of the movies I have left to get through, Mr. Holland’s Opus was the only one still on the list that I had already seen. I can’t say that I was looking forward to going through it again. There are a couple of issues with this movie that bother me a great deal. The first is a smaller problem: it’s far too long for the story it tells. Mr. Holland’s Opus approaches 2 ½ hours for a movie that is essentially about a music teacher teaching music. However, as Roger Ebert once said, no good movie is ever too long, so this is a problem that I can live with. The bigger issue is one that we’ll get to eventually.

The plot isn’t much more than what I just said. Glenn Holland (Richard Dreyfus, who manages to age 30 years over the course of the film) is a musician. At 30, he and his wife Iris (Glenne Headly) have decided to settle down. No more touring clubs and playing late nights. It’s time for Glen to get to his real desire: writing music. To help make this a reality, Iris picks up work when she can and Glenn has agreed to teach music at the local high school. The plan is that Glen will need to do the job only for four years before the two can live the lives they want.

Glenn’s adjustment to high school is not the easiest. He initially butts heads with Principal Helen Jacobs (Olympia Dukakis) and does so much more strongly and consistently with vice principal Gene Wolters (William H. Macy). He also meets and becomes friends with the football and wrestling coach Bill Meister (Jay Thomas). Glenn’s first year is difficult, as he has trouble connecting with his students. Eventually, he figures out that the kids aren’t that interested in Bach and Beethoven or dealing with Ionian scales. He learns to bond with them by dealing with what makes him love language. In truth, he’s forced to do this because Iris tells him, just as his frustrations are reaching their peak, that she is pregnant.

And so what happens, is exactly what you expect. Glenn Holland continues to put off writing his symphony that is going to make his name in the music world because, well, teaching starts to take up all of his time. The pregnancy means that he can’t spend the summer composing, so he teaches driver’s ed instead. And year after year goes by with Glenn Holland seeming to tread water and never get started on his plans.

The film is told episodically, using clips from history to move us through the years. Each time we stop for a bit, we get a story of Holland connecting with one of his students for one reason or another. Students who are problematic and become his projects, students who have no talent but work hard, students who have too much talent, etc. And eventually, we come to the end of the movie and the ultimate meaning of the film’s title. There’s a moment near the end where Glenn sings the John Lennon song “Beautiful Boy,” which contains the line, “Life is what happens to you while you're busy making other plans,” and that’s essentially the plot here.

The issue I mentioned above is that Mr. Holland’s Opus goes as hard as it can into melodrama territory. It often manages to work in spite of itself. A good part of this for me may well be the fact that I teach, and so it’s aiming for something very much in my wheelhouse. The melodramatic chords it often wants to play are chords that I know well. I’ve had problem students who have become my favorites, students who were too smart for their own good, and students who I still remember 15 years later (some of whom I still see and talk to). It’s easy for those emotional moments to work on me because of that.

But not all of them work that way. The supreme melodrama of Mr. Holland’s Opus comes in the form of his son. Since Glenn Holland is all about that music, his son is named Coltrane Gershwin Holland (played over the course of the film by Nicholas John Renner, Joseph Anderson, and Anthony Natale). And, of course, Cole is deaf.

This could have been interesting, but instead demonstrates to us that Glenn Holland is a bit of a dick. His child is deaf, and Glenn can’t be bothered to learn more than a couple of words of sign language to communicate with him. Instead, Iris ends up having to translate for him until late in the movie. His relationship with Cole is strained until Cole is in his late teens in no small part because Glenn seems so disinterested in anything that Cole does. At one point, Cole calls his father an asshole, and it’s pretty clear that Cole is right.

It’s all about the easiest way through for this movie. When Glenn teaches driver’s ed, the students are always terrible, driving over the median, speeding, jack rabbiting the car, etc. It’s an attempt at slapstick, and it’s completely unnecessary.

So here’s the thing--Mr. Holland’s Opus works in places because it follows a very particular formula that pretty much always works. It’s like showing someone a picture of a kitten. Kittens are cute. They’re going to “aww!” at the little kitten whether they want to or not. So the melodrama works on us even if we know it’s coming. But this is a movie that wastes the performances of the lovely and under-appreciated Glenne Headly. It’s a film that should be better than it is because it should be smarter than to constantly go for the lowest hanging emotional fruit.

Why to watch Mr. Holland’s Opus: It works in spite of itself.
Why not to watch: Boy, does it ramp up the waterworks!