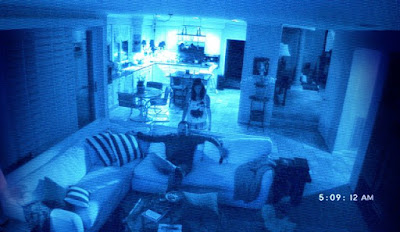 The They Shoot Zombies, Don’t They list was just updated, which means that all sorts of things moved around. When this happens, it means that I have to make a bunch of changes, too. I have to update the website (which I still have to do) and I have to renumber the reviews that I have written and simply haven’t posted yet. Doing that, I discovered that the review I thought I had written of Paranormal Activity 2 evidently didn’t save and is missing. What that means is that I have to rewrite it. So I’m not just pissed off that I watched this stupid movie, I’m doubly pissed off that I have to write about it a second time. The shit I do for this blog.

So, Paranormal Activity 2 turns out to not be a sequel of the first film, but a prequel. What this means is that we’re going to get a great deal more of the backstory of Katie and Micah (Katie Featherston and Micah Sloat) from the first movie. This is not going to be about them, though—it’s going to be about Katie’s sister Kristi (Sprague Grayden) and her husband Daniel (Brian Boland). When the film starts, the couple, along with Daniel’s daughter from a previous relationship Ali (Molly Ephraim) bring home their new son Hunter (William Juan Prieto and Jackson Xenia Prieto) from the hospital. Shortly thereafter, things start acting strangely around the house.

What we’re going to find out is that Katie and Kristi had a series of bizarre events when they were children that they both seem to have suppressed. Conducting her own investigation, Ali discovers that people can sometimes make pacts with demons, often sealing the deal with the life/soul of a first-born son. As it happens, Hunter is the first male born in the family in several generations, and the paranormal experiences around the house seem to coincide with his birth and arrival at the house.

Initially skeptical, but worried about the erratic behavior or Kristi, Daniel decides that the only way to keep his wife, daughter, and young son safe is to attempt to exorcise the house of the demon and pass the curse on to Katie. Since the first film happened, the results of those actions should be obvious.

As much as I hate to say this, there are things about Paranormal Activity 2 that, while they don’t mean I liked the film, mean that I liked the film more than I did Paranormal Activity. A big part of this is that the characters have far more understandable motivations. While Daniel ends up doing the wrong thing over and over, his reasoning, while flawed, is at least something that makes a certain amount of sense. He acts to save his wife and his son (and his daughter), and while it ends up ultimately in ruin, I get the idea. In Paranormal Activity, everyone is pretty much just an idiot.

Don’t think for a second that this means that I liked this movie, because I didn’t. When I say that I liked it more than the first movie, the margin is pretty small. The problem with the Paranormal Activity films, at least the two that I’ve seen (and I hope to not see any more of them, although the third one is on the Zombies list) is, well, several fold. One of the main issues is that the films are ultimately really dull. Not much happens through most of them aside from a few moments of shock and a couple of moments that attempt to be creepy, and are sometimes successful. Otherwise, they are a series of people making either really bad decisions or really dumb ones.

I get it, though. You make a movie that costs virtually nothing with some unknown actors and it makes a shit-ton of money. It would be ridiculous not to attempt to catch that same lightning in the same bottle, and, to the filmmakers’ credit, at least in terms of box office, they kind of did. Okay, it made about $23 million less than the first movie, but it also made something like 28 times its budget. Ultimately, we’re to blame for everything that happened after the first movie.

I suppose one of these days I’m going to have to strap myself in for the third one. Dammit.