Off Script: Trilogy of Terror 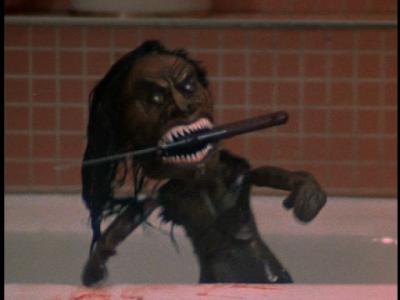 Trilogy of Terror is one of those legendary little horror movies that everyone has heard of for a specific reason. Right now, you’re almost undoubtedly thinking of that Zuni doll that is the feature of the third story. And that’s just it—there are two other stories in Trilogy of Terror. I mean, of course there are; it’s Trilogy of Terror, after all. The question that needs to be answered by the viewer of this movie is why everyone remembers the Zuni doll. Is it because the third story is really that great or is it because the first two stories are just that weak?

The answer is a little bit of both. Our third story is the only one that is a true horror story. It’s also an odd choice that all three of the stories aren’t so much named after what happens in them and aren’t given clever titles. They’re just named after the character played by Karen Black.

Yeah, Karen Black stars in all three of these stories, and in the middle one, she plays two roles. If they were all the same story, it’s the sort of performance that Eddie Murphy would be proud to call his own. I’m honestly never really sure how to take Karen Black. I think I’m supposed to take her seriously, but I kind of can’t. I think maybe it’s that she was cross-eyed. I know that’s not her fault, but she just looks…off to me.

The first story is called Julie, which is of course, the name of Karen Black’s character. Julie is a college English professor, and she is naturally someone who fits the stereotype. She’s tweedy and nerdy and buttoned up, something that seems to attract Chad (Robert Burton) in spite of himself. Chad decides he wants a little insurance for what he plans, though, so after he manages to get her to go out with him, he drugs her and photographs her in a variety of compromising positions. But will Julie allow herself to be blackmailed?

The second story is Millicent and Therese, where Karen Black plays twins who are polar opposites. Millicent is repressed and suppressed while Therese is wild and openly sexual. Millicent finds Therese abhorrent and decides that the best way to fight back against her is to use Therese’s love of witchcraft and voodoo against her.

In the final story, Amelia, Black has purchased a Zuni fetish doll for a male friend, something that her mother seems to object to, based on the phone conversation we hear. We learn that if the chain falls off the Zuni doll, it will come to life, animated by the spirit of a ruthless Zuni hunter that inhabits it. So, of course that’s what’s going to happen. The bulk of this story consists of Amelia being chased around her apartment by the doll.

As to the question asked at the, top, the answer is that it’s a little bit of column A and a little bit of column B. The first two stories are closer to thriller and don’t really delve into horror territory. They’re also not really that interesting. The third story is not only the best of the three by a country mile, it’s the only one with the pedigree of having been written by Richard Matheson.

One of the problems with Trilogy of Terror is that it’s a mere 72 minutes long. A single story of that length would probably work, but three stories mashed into that tiny running time doesn’t give a single one of them the real room it needs to breathe. Even the vastly superior third story is memorable only in retrospect because the Zuni doll is so damn singular. In the moment, the story isn’t that long and really isn’t much more than the same thing over and over. It’s actually comic how easily that thing seems to manage to open doors, and how difficult it is for Amelia to get out of her own apartment.

When all is said and done, I like the idea of this a lot more than the reality of it. I like the thought of the killer Zuni doll (and the shot of it cutting its way out of a suitcase) more than it probably deserves. But as an anthology, when only one story in three is really worth the time, you have to admit that it’s essentially a failure.

Why to watch Trilogy of Terror: If you thought I was going to say anything other than the Zuni doll, you’re out of your mind.
Why not to watch: Only the third story is really worth seeing.