It's Hard Out Here for a Pimp 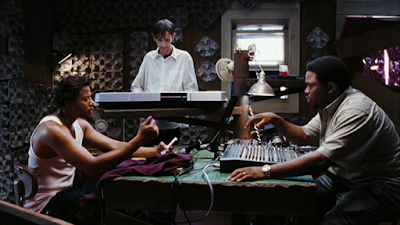 As I get nearer and nearer to the end of my Oscar lists, it seems to get harder and harder to get a movie watched. I still watch half a dozen or so movies every week; it just seems like a struggle to cross movies off the diminishing list. With Hustle & Flow, the reason is simple: I don’t like rap, so a movie about someone trying to break into the rap game doesn’t interest me that much. Honestly, it’s the same issue I had with Altman’s Nashville when I was finishing the 1001 Movies list: I don’t like country music, so a movie about the industry really didn’t interest me.

Hustle & Flow concerns DJay (Terrence Howard), a pimp, trying to survive the mean streets of Memphis. This is not a case where he’s a pimp in the sense that he’s trying to hook up. He’s an actual pimp with a stable of three women. Those women are Shug (Taraji P. Henson), who is pregnant; Lexus (Paula Jai Parker), who works a strip club; and Nola (Taryn Manning), his white hooker who he has working the street. DJay also deals weed, often in a club run by Arnel (Isaac Hayes). Arnel tells him that former Memphis rapper Skinny Black (Lucacris) is coming back to town for the Fourth of July, and DJay needs to bring his best product to the party. Around the same time, DJay accepts an old Casio keyboard from a junkie in exchange for some drugs.

This sets DJay to remembering back in his high school days when he worked parties. He starts tinkering around with the keyboard and writing lyrics. A chance meeting with an old high school acquaintance called Key (Anthony Anderson) pushes him further. Key works in sound recording and lives a very normal, straitlaced life with his wife Yevette (Elise Neal). But he wants more. DJay plays him some of the tracks he’s been working on and Key decides that it’s time to see if they can make it. Key calls in Shelby (DJ Qualls) to help, and soon enough the trio is working on tracks, accompanied by Shug, who it turns out has a serious voice.

And honestly, that’s where Hustle & Flow goes for the first almost 90 minutes of its running time. It’s not until the last half hour that Skinny Black shows up and we see what happens when DJay tries to sell him on his mixtape.

I’m not really sure what to think now that I’ve watched Hustle & Flow. It’s hard to dislike the performances in general. Terrence Howard, for all the flaws he may have as a person, is a good actor and can sink his teeth into a well-written role. Taraji P. Henson is also generally good in everything she’s in. But here, it’s hard for me to want to spend time around these characters. Their either actively awful or incredibly passive. DJay might tell us over and over that it’s hard out there for a pimp, but that doesn’t change the fact that it’s such a creepy way to live that I find it difficult to care that much about him.

Another deal-breaker for me here is DJ Qualls. I don’t have a genuinely strong opinion on Qualls one way or the other, except to say that he’s not really known for being in a lot of good movies. It’s probably better for everyone that he’s working in television a lot more these days. I’m quite willing to accept DJ Qualls as a lot of things, but it’s a stretch to see him as the guy putting down the backing tracks for a thugged-up pimp spitting about growing up on the mean streets and finding women to turn out. It’s a lot easier to buy him as the guy who plays piano at Key’s church, which is how he’s introduced.

Truthfully, Hustle & Flow isn’t a bad movie, but if you don’t care about the music (and I don’t), it’s hard to care about the characters. The closest point of comparison I have is with Straight Outta Compton. I didn’t care about that music, either, but the movie is about so much more. It’s about those personalities and that entire world. Hustle & Flow is just about the music and about trying to make it in that world. It’s as small as DJay seems to think his world is when he starts writing lyrics. And because of that, I can’t really be bothered to care that much.

Why to watch Hustle & Flow: If you’re into the music, it’s as good as you’re gonna find.
Why not to watch: DJ Qualls is a rap producer? C’mon...