Wednesday Horror: The Brides of Dracula 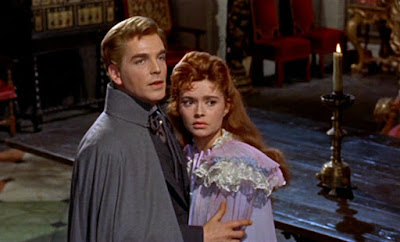 I hate to be the one to say things like this, but there are times when movies just blend together and don’t leave much of an impression on me. The Brides of Dracula is one such movie. I like Hammer horror films, and I like the ones that deal with the classic monsters, but there’s a massive hole in The Brides of Dracula. That hole is named Christopher Lee, who decided not to reprise his role for this. In fact, the movie starts with the statement that Dracula is really dead, but that’s not going to stop us from having vampires galore in this one. After all, even though the “Dracula” in the title is misleading based on the vampires we do get, we’re told that there are going to be multiple brides.

So, true to the Hammer ideals, The Brides of Dracula is going to be set in roughly the Victorian era. Also, we’re not going to be in London this time, but actually in Transylvania. Young French schoolteacher Marianne Danielle (Yvonne Monlaur) is coming to Transylvania because she has accepted a teaching position at a school there. But, of course, as she nears the place of her new employment, many of the locals appear to be wary of outsiders and terribly superstitious. She is abandoned at an inn by her coach driver. Shortly after this, Baroness Meinster (Martita Hunt) arrives and offers Marianne a place in her castle for the evening.

It is here that Marianne meets the Baroness’s son (David Peel), whom she claims is a madman. Marianne encounters him that evening and discovers that he has been chained to a wall by a leg iron. He claims to not be mad, but the victim of his mother who has imprisoned him and usurped his rightful title as Baron. Naturally, Marianne frees him, and naturally, he’s actually a vampire and he’ll soon be plaguing the people of the nearby town. I mean, if we’re going to have a vampire movie, we’ve certainly got to have someone capable of creating vampires, right?

Enter Dr. Van Helsing (Peter Cushing), who discovers Marianne and escorts her the rest of the way to her new position. Van Helsing has been called to the area because the local priest suspects evil influence from the Baroness and her castle. Since Van Helsing is a vampire expert, he immediately suspects the undead and goes about trying to prove it. Fortunately, it’s not that hard, because soon after his arrival, a young girl rises from the dead to join her new master as one of his brides. Soon enough, the Baron shows up in Marianne’s life again and charms her into agreeing to marry him. He also takes this opportunity to turn Gina (Andree Melly), Marianne’s roommate. The conclusion of the movie is going to consist of Van Helsing’s quest to put an end to the vampire infestation and the Baron’s desire to turn Marianne into his third bride.

So there’s confrontations to happen at the end, and even Van Helsing is going to be bitten at one point. This also has one of the most inventive deaths for a vampire I’ve seen in a long time. In fact, it’s the ending that made me realize something about this film.

I’d seen this before. It was decades ago, but I remember the ending distinctly. I’m going to spoil that ending here, so if you haven’t seen The Brides of Dracula and don’t want the ending spoiled, jumped to the next paragraph. Anyway, Van Helsing and Marianne eventually make it to a mill, and Van Helsing arranges the windmill sails into a gigantic cross and gets the Baron caught in its shadow. It’s incredibly distinctive and cool. The film also seems to conveniently forget that there are a couple of the Baron’s brides still at large at this point, but Van Helsing doesn’t seem to be too worried about that or the fact that they’ll be very likely to be gunning for Marianne once all the hubbub dies down.

So yes, I’d seen this before and I completely forgot about it. I mean completely until the very end. That doesn’t speak well for a film that it was that forgettable, and that when I watched this originally, I hadn’t really seen that many movies.

And that’s really the problem with The Brides of Dracula. Aside from that surprising and unique ending, there’s very little here that is memorable. David Peel simply lacks the charisma of Christopher Lee and lacks the gravitas to be a true presence on the screen as an incarnate evil. Peter Cushing is great, of course, because he’s Peter Cushing, but he has no real foil to fight against. Because of this, the film ends up feeling uneven, like we know precisely where we’re going to get to and without the compelling villain figure, the journey isn’t that fun or joyful.

There are some good moments. After all, this is Hammer in its prime and while many of their movies weren’t great, they all had a particular quality about them. That’s all here. The film looks great and the costumes look authentic. But ultimately, there’s not much to recommend it.

Why to watch The Brides of Dracula: The ending is pretty cool.
Why not to watch: There’s not a lot here that’s really memorable.

Email ThisBlogThis!Share to TwitterShare to FacebookShare to Pinterest
Labels: horror, Terence Fisher, The Brides of Dracula