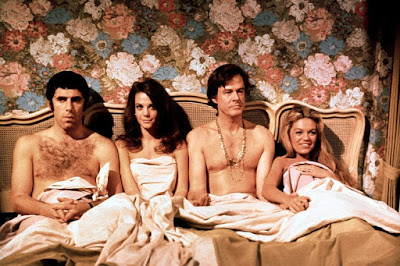 Before I delve too deeply into Bob & Carol & Ted & Alice, I want to remind long-time readers and inform newer readers of just how much I hated The Big Chill. I say this because these two movies have a significant element in common. The characters here are of the sort who cannot seem to help but indulge in whatever they think is worth indulging in. In a lot of ways, this is sort of The Big Chill for the early part of the Baby Boomer generation. It’s the movie for those people who were just a little too old to fall in with the Hippies but didn’t want to miss out entirely on all of that free love goodness.

We’re going to start in the company of Bob (Robert Culp) and Carol Sanders (Natalie Wood), who are at some sort of retreat where they are being “open” and “honest” about their feelings. They emerge from the weekend with some sort of spiritual awakening of being completely open and honest with each other. They reveal this truth to their friends Ted (Elliott Gould) and Alice Henderson (Dyan Cannon), who find this change in their friends a bit startling.

Everything gets very much tested when Bob returns from a business trip and freely admits to Carol that he had an affair while in San Francisco, something he admits in the interests of being open and honest. He’s shocked and angry initially when it’s clear that Carol is ultimately okay with the affair and doesn’t really mind that much. Later, Bob initially freaks out when Carol has an affair with a German tennis instructor, but ultimately comes to the same place she has, and even shares a drink with the guy.

All of this starts to play merry hob with Ted and Alice. Alice in particular is hit hard by Bob’s infidelity and Carol’s evident acceptance of what happened. This even starts to affect her relationship with Ted, as she apparently loses all interest in sex. Meanwhile, Ted admits to Bob that he was tempted once but didn’t act on it, but still feels guilt. Bob counsels him by saying that he’s already got the guilt, so he might as well not waste it.

I’m going to spoil this movie to some extent here. I’m not going to reveal the actual ending, but I am going to reveal what happens a few minute before the end of the movie. If you don’t want this movie spoiled for you, you’ll want to skip the rest of this paragraph. Ted, assuming that the same sort of honesty that allowed both Bob and Carol to get away with affairs admits that on his last business trip, he had an affair of his own. Alice naturally freaks out initially, but then decides that it’s now her turn, and she wants to involve everyone, suggesting a partner swap.

I’ve got to admit, there’s a lot to dislike here. First and foremost is the personalities of our four main characters. Bob and Carol especially are the sort of smarmy people who believe themselves to be fully enlightened, but are instead simply wrapped up completely in their own emotions and experiences. They’re the sort of people who easily justify screwing over another person because it was what they felt “spiritually” needed to be done. They are a particular level of smug and arrogant that I find difficult to be around.

Ted and Alice are marginally better people and thus marginally easier to be around. In fact, if Ted didn’t listen to Bob, they’d be completely morally normal people. In this respect, Ted’s biggest character flaw is that he’s kind of a pushover and weak. Alice is really the only person here who seems aggrieved, and she dives right into the same bullshit as everyone else with little more than a short reaction.

And ultimately, that’s my opinion of this movie and these characters. They are exactly the sort of people who will happily shit on someone else and justify it by claiming it was the right thing to do or that they felt compelled to be “honest.” They’re emotional bullies hiding behind that façade of moral superiority, and I frankly don’t have time for that kind of behavior.

It takes a great deal to make me dislike Natalie Wood and Elliott Gould, but Bob & Carol & Ted & Alice managed to do exactly that.

Why to watch Bob & Carol & Ted & Alice: If you’d like to see Natalie Wood and Dyan Cannon in their underwear, this is here for you.
Why not to watch: All four of these people are awful.

Posted by SJHoneywell at 4:28 PM