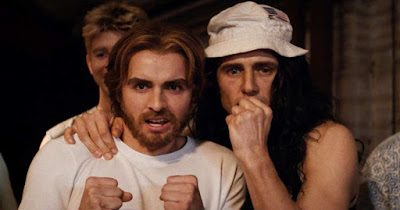 Spend enough time around movies and you’ll run into the people who celebrate the junk side of cinema. In my case, I befriended a number of them, and guested multiple times on the now-retired Lair of the Unwanted podcast where I discussed some truly shit movies with Jason Soto and Nolahn. That was their schtick, and both of them had me watch some serious trash over the years. That’s okay, though. I embrace the entirety of the cinematic universe, or at least as much of it as I can. The Lair boys had a unique relationship with The Room, even doing a script read at one point (with myself as humble narrator). Now, finally getting around to The Disaster Artist, I’m not sure I could get through this without mentioning Jason and Nolahn and talking a little about my relationship with that Titanic of a movie.

While both Jason and Nolahn made me watch movies in the past, neither of them introduced me to The Room. The guilty party there was my former podcasting partner and the third leg of the “Your Face” movie website troika, Nick Jobe. Nick and I gave each other movie challenges, and, years ago, he made me watch The Room. I did, and I had a…unique reaction to it. I mean, I get that it’s truly terrible, that it’s Ed Wood-levels of shit. I understand why people love it, and once I watched it, I wanted to watch it again right away. At the same time, it pisses me off that this lumbering shitgibbon named Tommy Wiseau is lauded for being completely incompetent at movie making. His piece of shit movie reportedly cost $6 million, which could have financed at least half a dozen interesting and unique indie films.

So, if the eventual cult success of The Room is a paean to incompetence, what then is The Disaster Artist, a movie about the making of the cult success? How are we to take this additional glorification of the shockingly weird person that is Tommy Wiseau (played in the film by director James Franco) and his odd friendship with fellow actor wannabee Greg Sestero (Dave Franco)? How do I process the fact that seemingly everyone wanted to be in this movie? There are cameos from a huge cross-section of Hollywood here, most playing roles that are on screen for less than two minutes. Jacki Weaver, Seth Rogen, Zac Efron, Josh Hutcherson, Megan Mullally, Melanie Griffith, Sharon Stone, Hannibal Buress, Randall Park, Bob Odenkirk, Judd Apatow, and Brian Cranston all appear in the film. This doesn’t include the handful of people appearing as themselves in a short documentary-style opening.

I’m not going to discuss the plot here, because there’s not that much to discuss. If you’ve seen The Room, you know most of the second half (or so) of this. If you haven’t, you should really track it down before you sit down and see this. Seriously, it’s a pretty astonishingly good companion to Wiseau’s train wreck.

I have to wonder about the man at the center of this, though. Seriously, what kind of a person is Tommy Wiseau? Just as his accent is completely incoherent and incomprehensible (he’s apparently Polish), leading some (like myself) to conclude that he is actually some sort of Lovecraftian elder god, the movie’s take on his personality is all over the map. Is he a selfish bastard? Is he a directorial dictator? Is he a vulnerable and need person so scared of betrayal that he pre-emptively attacks anything and anyone who looks like they might do him dirt? The movie would have you believe all of this simultaneously, and still have you believe that he is something like a genius.

When I commented that the movie is very much a celebration of ignorance, this is kind of what I meant. Wiseau is a terrible filmmaker. He has no idea what he is doing, and if The Room didn’t make that apparent, The Disaster Artist certainly does. So why the hell are we celebrating this? How many truly talented filmmakers and actors will never get a debut and will never have careers because we need to gaze into the madness that is the navel of Tommy Wiseau?

Look, The Disaster Artist is fascinating. Both of the Francos are great in it, and the fact that James Franco got #Metoo’d is all that kept him out of the nominations for 2017. It’s hard to not like this movie, but I wish that wasn’t the case. We shouldn’t be celebrating the trash of this world, and yet here we are.

Why to watch The Disaster Artist: You’ll believe a bad movie can fly.
Why not to watch: It’s a celebration of incompetence and failure.