Film: The Autopsy of Jane Doe
Format: DVD from Sycamore Public Library on The New Portable. 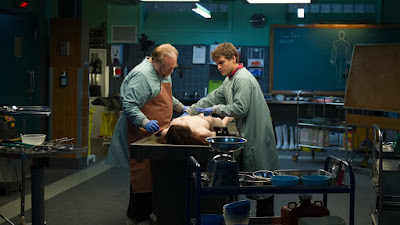 I love horror movies, and yet I remain squeamish about a lot of medical stuff. There’s just something about it that really bothers me a great deal. Because of that, I came to The Autopsy of Jane Doe not really thinking it was going to be a movie I wanted to watch. I didn’t relish the thought of spending just under 90 minutes feeling nauseated and queasy. Still, the film stars Brian Cox and Emile Hirsch, so it comes with a solid cast.

We start at a crime scene where the local sheriff (Michael McElhatton) uncovers the body of a young woman apparently buried. This is Jane Doe (Olwen Catherine Kelly), who is clearly dead but has no identifiable mark on her and no apparent cause of her demise. Because of this, she is sent to the local coroner, Tommy (Brian Cox) and his assistant son, Austin (Emile Hirsch). Before we get to the autopsy of our Jane Doe, though, we’re going to make sure there’s plenty of gore right off the top. We get to watch part of an autopsy on someone who was badly burned. Since we want to get our money’s worth here, we need to have a full investigation of various parts of the body because our corpse may have burned, but died another way, which requires poking around in crispy body parts and gooey innards.

Anyway, our Jane Doe gets rolled in, and despite the fact that Austin has a night planned with girlfriend Emma (Ophelia Lovibond), he decides to stay and help his father with the autopsy. And right away, things are strange. Despite there being no outward signs of trauma, Jane Doe’s wrists and ankles are all not just broken, but shattered. Her tongue has been roughly cut out, and one of her teeth extracted. The more the two investigate into the body, the stranger the case becomes. Her lungs are blackened, but there is no evidence anywhere else of her having been in a fire, for instance. And then strange things start happening around the morgue—drawers open, lights flicker, power surges, and more.

There’s a great deal that works very well in this film. Not the least of this is having two very good actors in these roles. It’s always fun to see accomplished people working in genre film, and Brian Cox is the sort of actor who doesn’t shy away from doing so (see X2 and especially Super Troopers for evidence of this). Here, he has the sort of acting chops that sell the weirdness. He’s not accepting of what is happening around him initially, but because the man has skill, he sells his slow realization of just how strange and terrible this autopsy really is.

For his part, Hirsch manages to match Cox in most of scenes. He plays the scenes a lot looser, of course, but that’s more the character and less the actor playing the role.

I have to admit that there are a lot of places in this film that I had trouble watching. I did get through all of it, including that gigantic Y-shaped incision to open up the body cavity, but I can’t say that I was very happy when it was going on. It helps a great deal that the gore here isn’t gratuitous. I have a real problem with gore that is simply there for the sake of it being there, and The Autopsy of Jane Doe is the exact opposite of that. Here, the gory parts aren’t so much bloody as just nasty, but are also essential to the film. Tommy and Austin learn what is happening specifically by investigating the body on the table in front of them.

In truth, I didn’t know what to expect here, but I was pleasantly surprised. This is the sort of film that I like seeing when I’m not really expecting much of anything. It’s smarter than it has a right to be and better cast and acted than genre film can normally hope for. It’s also exactly the right length. Five minute shorter wouldn’t be enough and ten minutes more would be stretching the premise.

All in all, I’m not sure The Autopsy of Jane Doe is the sort of film one enjoys watching, but more appreciates existing. It’s smart and has some great scare moments, and really, is there anything more you can ask for in a horror movie?

Why to watch The Autopsy of Jane Doe: This is smart horror filmmaking.
Why not to watch: Well…the autopsy parts.