Bungle in the Jungle 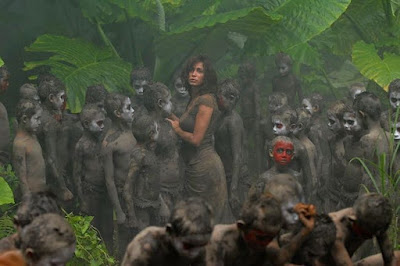 A lot of movies are naturally combinations of other movies or of multiple ideas. Sometimes, those are unique combinations, or at least unexpected ones, while some are commonplace. There are plenty of movies that are essentially “Die Hard on a _______,” for instance. Speed was “Die Hard on a bus.” Some movies are far more interesting combinations of movies. Vinyan, for instance, feels like the novel “The Lord of the Flies” combined with the last part of Apocalypse Now with a sizable dollop of Cannibal Ferox.

If you think that means we’re going to have white people traveling to the middle of nowhere and attacked by groups of native people, you’d be exactly right. We start with the tsunami in the mid-2000s that killed off a quarter of a million people. Among the dead is Joshua, the young son of French couple Jeanne (Emmanuelle Beart) and Paul Bellmer (Rufus Sewell). The couple has stayed in Thailand, and six months later, while at a fundraiser for an orphanage, Jeanne sees footage of a child that she is convinced is Joshua.

Paul is naturally convinced that she is wrong, but also believes that if there is even a minor chance that their son is still alive that they should take that chance to see if they can rescue him. The story is that a number of children are kidnapped and sold. Jeanne is convinced that Joshua is among them, but the area in the film is restricted and generally off-limits. To get there, the couple hires Thaksin Gao (Petch Osathanugrah), a criminal who smuggles girls into Mynamar, but also has ties with the local military.

What happens is probably not too terribly difficult to guess. Much of what ends up happening to the Bellmers is the sort of “take advantage of the white people who don’t speak our language” that you’d expect to happen. They are taken places and shown orphan children purported to be their son and that are clearly not their son. Eventually, Paul tires of what is happening and is convinced that they are wasting their time. He tells Gao to take them back, but Jeanne steals the rest of his money, gives it to Gao, and tells him to keep up the search.

Where does this end up? I won’t go into any detail here, but I will say that ultimately, it’s not that big of a shock. While the ending is very dark and disturbing, it’s also an ending that is very easily seen from a distance. “Shocked but not surprised” is probably the best way to put it, and really, the “shocked” part of it is just that some of what happens is disturbing.

While Rufus Sewell is a large part of Vinyan, it is Emmanuelle Beart who is really the heart and soul of the film. The story runs a very fine line between whether or not Jeanne Bellmer is bordering on the insane, driven by grief, or perhaps seeing something that no one else can see. It’s a fine performance for what it is. It’s the sort of thing that would have been played by Isabelle Adjani had the film been made 20 years earlier.

The movies I referenced at the top should give you some idea of exactly where we end up. The last act of the film—especially the final 15-20 minutes or so—are worth seeing. The problem is the getting there, which is very slow. Not a great deal happens in Vinyan for the first hour of the film aside from setting up the plot, some false leads on children, and seeing Jeanne slip further and further into a sort of driven psychosis regarding her son. The payoff is good, but might not be worth the kind of sloggy hour that gets us there.

Did I like Vinyan? Kind of. It’s not one I’ll watch frequently, and I’m not sure if much of the film isn’t essentially racist. I’m not convinced it is, either, but I don’t think it’s a difficult argument to make. I can’t really recommend Vinyan, but I also can’t say that it’s one to specifically avoid.

Why to watch Vinyan: This goes dark in a very weird way.
Why not to watch: It takes a long time to get anywhere.