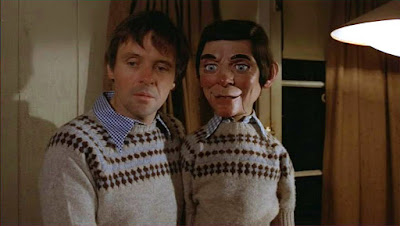 When Magic was released in 1978, I had just turned 11. This is important only in the sense that I remember the trailer. It’s one of the few trailers I can actually remember (along with Suspiria) because it’s one of the great minimalist trailers in horror movie history. In fact, the original trailer was pulled from broadcast because parents complained about how scary it was. I have to admit that it made an impression on me.

If you watch that trailer, you’ll get at least half of the point of the movie, provided you think about if for just a second. Seriously, watch the trailer. If you can’t figure out at least the main thrust of the plot from that, you don’t get to read any further.

So, yeah, this is a horror movie that involves a ventriloquist dummy. That should immediately twig you to the fact that this is also going to be a movie that involves a ventriloquist who has multiple personalities, or schizophrenia, or some other dissociative disorder. That vent is Corky (Anthony Hopkins), who fails as a magician when first starting out. He’s told that he needs a gimmick to make the act work, and some time later, he re-emerges as a magician/ventriloquist with a dummy who looks a little bit like him named Fats (voiced by Hopkins, who learned some ventriloquism for the role).

In this new incarnation, Corky is a hit, and his agent, Ben Greene (Burgess Meredith) is on the verge of lining up a television show for him. Part of the deal, though, is that Corky needs to take a full medical exam, something that he objects to. The reason is obvious—a medical exam will quickly reveal that he has severe mental issues in the form of Fats, who in all ways seems to have a mind of his own. In response to this, Corky flees for the Catskills where he grew up.

It is here that he runs into Peggy Ann Snow (Ann-Margret), his high school crush, who is now stuck in a marriage with Duke (Ed Lauter). Corky charms her (despite genuinely being not very charming) and the two tumble off to bed. This will eventually cause problems with Duke, but it causes problems with Fats right away. When Ben shows up, he figures out the reason Corky went AWOL, especially because he can’t go more than a couple of minutes without Fats taking over. Ben leaves, but naturally Fats can’t let him spread the word that Corky is several crackers short of a package, and soon it is Fats who is driving their shared body much more than Corky is.

There’s a great deal to recommend Magic as a story despite being able to twig almost immediately where it’s going to go. The idea of a ventriloquist being dominated in some respect by his dummy, or having the dummy have a much more dominant personality is probably about as old as the idea of ventriloquist dummies themselves. So, honestly, it’s not really the story that is going to get them in the door with Magic, although the story itself is well-told. The case, on the other hand, is top notch. Ed Lauter was a solid character actor, and David Ogden Stiers is in a scene or two, but our main three are all tremendous.

Hopkins, of course, is Hopkins. He looks so young here (he was about 40), but he looks almost childlike compared with how he looked a mere baker’s dozen of years later in The Silence of the Lambs. All of the skill is here, though—it’s as good a performance as he ever gives. Ann-Margret is not give a great deal to do—her job is to look desirable and be an object of obsession for Corky—but she does this well, and probably better than the role deserves. It’s Burgess Meredith who steals the scenes he’s in, though. This is two years after Rocky, and he’s almost a completely different person.

The problem with Magic is that once you hear “ventriloquist dummy,” “horror movie,” and “romance element,” you know exactly where this is going to go. And you’re not wrong—that’s exactly where it goes. There’s a lot that could have been done here, but it instead goes for the best version it can of the story you knew it was going to be.

Why to watch Magic: A great idea.
Why not to watch: It doesn’t go far enough.