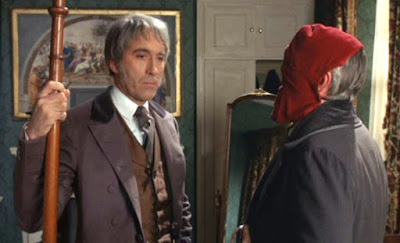 You never quite know what you’re going to get with an adaptation. For instance, you might get something that is relatively accurate to the source material with some changes due to time constraints. Jaws, for instance, is similar to the book in a lot of respects (and better in most). You might get something with significant changes for one reason or another. Minority Report has the basic idea in common with the original short story, but little else. Major characters in the movie don’t exist at all in the story, and none of the characters in the film resemble their short story inspiration. And then you get a movie like The Oblong Box. This claims to be inspired from the Poe short story of the same name, and yet the only resemblance the film has to the story is the title and the presence of a coffin.

In the original story, a man encounters someone on a ship off the coast of South Carolina. The man in question is alleged to have a beautiful, young wife but is seen with a wife who is quite unattractive. The man also is traveling with the titular oblong box in which the narrator believes he has stored a piece of valuable art. When we get to the end of the story (yes, spoilers for a 150+ year old short story; deal with it), we learn that the man’s “wife” on the voyage was actually his servant. His wife died shortly before the trip, and it was her body in the oblong box, because, well Edgar Allen Poe.

Absolutely nothing like that happens in the movie. There’s not a ship, there’s not a deceased wife. Saying this is based on the Poe short story is almost insulting. Sure, when Roger Corman did a bunch of period films based on Poe stories he added and changed a great deal, but at least he kept the core of the stories the same. You could see the DNA of the original tale in the final movie production despite additions and changes. In this case, there’s nothing even close.

In fact, we’re going to start in Africa. True to form for a late-‘60s film, this is going to be really racist Africa. We’re not going to be in a civilized city, but in “Ooga-booga, Africa-is-all-one-country” Africa. After a few shocking scenes, we return to England where we spend some time with Sir Julian Markham (Vincent Price), who has an insane brother named Sir Edward (Alister Williamson) that he keeps locked and chained in a tower. I’ll give the movie this—while there’s nothing like this in the original story, this is very much a Poe-like element. We soon learn that Edward, while insane, isn’t gibbering. He’s arranged for something like an escape through the family lawyer, Trench (Peter Arne). A transplanted shaman named N’Galo (Harry Baird) will concoct a potion that makes it look like he has died, and with that, he’ll be not only legally dead, but free to leave the family house.

Naturally, things go wrong. His “body” is discovered by his brother. Since Edward is badly disfigured as well as insane, Julian puts him in a coffin immediately and arranges through Trench to have another body supplied to him. It is a long-standing tradition of the Markham family that there be a viewing of the corpse before burial. A suitable replacement is found, surprisingly no one recognizes the guy from a nearby village, and the replacement body is dumped while Sir Edward is buried. He’s alive but comatose, and only some people know he’s still alive.

Soon enough, his body is dug up by some grave robbers and sold to Dr. Neuhartt (Christopher Lee) for experiments. Neuhartt gets quite a shock when he lifts the lid of the coffin and the body inside sits up. Now alive and using his knowledge of Neuhartt’s capital punishment-earning grave robbing habits, Sir Edward dons a red mask to hide his scarred face and begins terrorizing the countryside.

Like I said, there’s nothing here that even remotely resembles the original story on which it is claimed that this film is based.

There’s also not much here that is very interesting. The horror is of the tamest variety. Sir Edward goes on a revenge murder spree of the men who let him be buried alive. His murder method of choice is throat slitting. In this film, that means he more or less draws a thin line on someone’s neck, which eventually kills them. There are no jump scares here because there are no scares at all. It’s entirely predictable from start to finish. This is true even if you don’t know the “source material” or know that material so well that you expected it to be rendered exactly. The only surprise is about five seconds of nudity.

I’d love to say that a film featuring both Vincent Price and Christopher Lee would be worth watching on no other merits than their presence, but that would be a lie. This was a snooze, and I’m not just disappointed, I’m angry with the claimed and failed connection to Poe.

Why to watch The Oblong Box: You don’t need more than Vincent Price and Christopher Lee.
Why not to watch: This is not the Poe story you think it is.