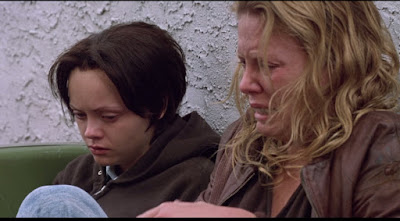 Aside from the movies that have been on my Oscars list for a year or two, there is still a handful of movies I haven’t watched. Most of these are movies that I can’t find, but there are a couple I just keep putting off. In the case of Monster, it might be that I just didn’t really want to dive head-first into the world of Aileen Wuornos again. The 1001 Movies list is scant on documentaries, but over its history, two of those documentaries are about Aileen Wuornos. How much did I really want to dive into a slightly fictionalized version?

Because here’s the thing—I don’t know how fictionalized this is. The documentaries more or less tried to tell the story of Aileen Wuornos from her point of view, and essentially presented the case for someone deeply disturbed. Monster very much does the same thing. The real Aileen Wuornos was a prostitute who killed a series of Johns. As depicted here, her first victim was attempting to rape her, and she defended herself. Following this, Aileen (played in an Oscar-winning performance by Charlize Theron) essentially decides that all of her clients are going to kill her and she acts pre-emptively. She makes an exception for one person, and also kills another who was legitimately trying to help her.

Mixed up in all of this is Selby Wall (Christina Ricci, the character being based on Tyria Moore), who becomes something like Aileen’s life partner as the killing spree begins. Selby flees a highly-religious family situation clearly not prepared to accept her lesbianism. She and Aileen embark on a pattern that essentially consists of Aileen committing a murder or two, the pair stealing the car of the latest John, and then the two of them heading on to somewhere else. Eventually, Selby twigs to the fact that Aileen isn’t so much acting as a prostitute as she is simply murdering people and stealing their money and cars.

So here’s the thing about Monster: this is a very ugly movie in a lot of ways. When you look at movie villains, many of them have a redeeming feature or two. That doesn’t appear to be the case with Aileen. She is vicious, angry, and abusive. Her behavior is happily explained by her as being the result of sexual abuse and physical abuse she suffered as a child, and that may be the case. But it’s also true that Aileen has no real redeeming qualities. This is one of those films that just feels dirty in a lot of ways. I don’t mean smutty or prurient; I mean physically dirty, like there is a layer of grime and stink over everyone and everything in the film.

So let’s talk about the two central performances. For Christina Ricci, Monster is an important role. While she had certainly played more adult roles in the past (Sleepy Hollow springs to mind, as does Buffalo 66 and Prozac Nation), Monster is very dark, and her character is dark as well, and without any hints of light or comedy. She’s not sardonic or witty, and she’s not a character we’re going to cheer for. She’s uneducated, a bit thick, and not smart enough to understand things, but still neck-deep in abetting murder. It’s a fine performance that should have garnered more recognition.

The truth is that I don’t have a great deal to say about Monster. This is not a film that one enjoys, but that one endures.

Why to watch Monster: Charlize Theron and Christina Ricci.
Why not to watch: It’s as unpleasant as any movie where a serial killer is the main character.