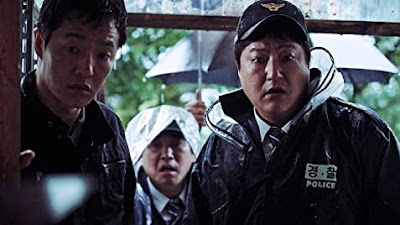 I’ve said for a long time that one of the more interesting national cinemas going is South Korea. South Korean films, at least those that get exported, tend to be interesting, smart, and well-made; evidence Parasite. One of the genres in which South Korea excels is horror. The Wailing is one of those films that people point to not merely to suggest just how good South Korea’s film industry is, but as an example of their exemplary horror movies.

The real question about The Wailing is what kind of horror movie it is. Is it about possession? A haunting? Some sort of plague? It’s kind of all of those and none of those. We start in a small Korean village called Gok-seong (hence the Korean name of the film) where a rash of bizarre murders is taking place. Police officer Jong-goo (Kwak Do-won) is one of the people charged with investigating the crimes. What he discovers is that a Japanese man (Jun Kunimura) has recently moved to the village, and the problems started soon after. He also hears rumors about the man that seem to coincide with disturbing dreams he’s been having.

Problems for Jong-goo really begin when it seems that his daughter, Hyo-jin (Kim Hwan-hee) is suffering from the same strange spells and violent episodes as the affected people in the area. His mother-in-law calls in a shaman (Hwang Jung-min) to perform a ritual exorcism, but even this doesn’t seem to work. Jong-goo is also plagued by the appearance of a mysterious woman who may be trying to help him with the plague crimes and may also be responsible for them.

The Wailing is an interesting watch, and also a surprisingly long one. Horror movies, by their very nature, tend to be a lot shorter than dramas and a lot of other genres. It can be hard to maintain the intensity needed for a lot of horror for any length of time, and yet The Wailing is a touch longer than 150 minutes. It pulls this off pretty well and never really gets overwhelmed by its length.

There are moments, though, that don’t quite seem to fit with the rest of the film. The Wailing very much wants to be a serious horror movie, and it is for the most part, but there are moments in it that come very close to tracking as comedy. I can’t figure out if this is intentional or not, and I’m not entirely sure that the moments aren’t actually unintentionally funny. For instance, there is a scene where Jang-goo and several others encounter a man who is evidently possessed of the evil in the village. The fight is terrifying—a couple of characters are horribly wounded and the man himself is clearly in extreme, tortuous pain. And yet at one point, he breaks a shovel in half and throws part of it at Jong-goo, and it’s like a classic piece of slapstick. In the same scene, the man gets a rake stuck in his head, and I’m reminded of the dart hit Shaun in the forehead in Shaun of the Dead. Was this intentional?

I have to think that it wasn’t, and that either the tone just isn’t quite right in the film or something is happening in the translation from one culture to another. The example above is just the most memorable of these moments in the film; there are several others that I can only read as being comedic. That’s difficult for me to grok with a movie that is this dark in so many ways. And yet there’s clear comedy moments in films like The Host as well, and that one is pretty dark, too. There are so many in this film that I genuniely considered tagging this as a comedy as well as a horror movie.

I think the truth is that I probably need to watch The Wailing a second time. The story here is a very good one, and there’s a lot that I like and want to like in it. But this issue with humor is really nagging me. If it’s unintentional, then there is a real disconnect between the story and the way the story is portrayed. If it’s intentional, then the story is very oddly pitched tonally. I’m not sure which is the worse crime.

Why to watch The Wailing: It’s a great example of why Korean film is so great right now.
Why not to watch: There are moments that seem to border on unintentional comedy.