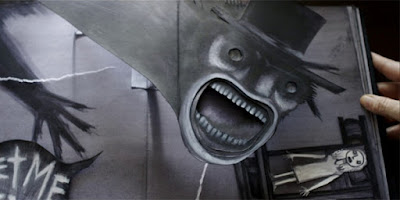 Being under lockdown has given me the opportunity to watch a lot of the movies I have bought in the hopes of eventually watching. In truth, some of these I inherited in a way as well. Movies on lists I am pursuing that I own are always low-priority, because I can always watch them whenever I want. Lack of access to libraries has changed that for me. It’s meant that now, to watch movies I haven’t seen, I’ve got a back stock that is ready to go. I’ve been working my way through them at a rate of between 8 and 10 per week (along with some movies I got from libraries before the lockdown). Today, it was time for The Babadook.

I had, of course, heard a great deal about The Babadook before watching it. It is, from what I’d heard, another example of the idea that women direct horror movies far better than they have traditionally been given credit for in the past. And, true to form, director Jennifer Kent has directed one feature-length film since this film came out in 2014. Seriously, I’m tired of banging this drum—someone give Jennifer Kent a script.

Our main characters here are Amelia (Essie Davis), a single mother, and her son Samuel (Noah Wiseman), who is about seven and severely troubled. A big part of Samuel’s problem is that his father (played in a few flashback-type scenes by Benjamin Winspear) was killed driving Amelia to the hospital to deliver Samuel. He has a number of behavioral problems, which include an obsession with monsters and creating weapons (like a crossbow that fires darts) to kill them. Samuel is essentially friendless, and in constant trouble at school, and as the movie starts, even their family is starting to lose patience with him.

The world starts to shift in bad ways for Amelia and Samuel when he discovers a children’s book called “The Babadook” that he wants to be read as a bedtime story (and incidentally, “Babadook” rhymes with book and look, like almost every word that ends in “-ook.” I don’t know why it seems instinctive to pronounce the last syllable as “duke.”) A few pages in, and Amelia decides that it’s not appropriate—it’s actually quite gruesome and scary.

The genius of the story, and the thing that really makes the movie work, is the fact that Mr. Babadook is harmless as long as you don’t know about him. Once you are aware of him, he begins to torment you, showing up in dreams and even in your waking life, wanting to be let in, which is soon revealed as more or less being let into your body. Of course, that’s what’s going to happen here. The expectation is that Mr. Babadook will become Samuel, but it’s Samuel who is vigilant against monsters. No, since Amelia is denying the existence of Mr. Babadoo, she becomes his target.

There are a few very good moments here. Sure, there are a couple of decent jump scares, but the film really does try to go deeper into the well of horror here to bring out some actual disturbing moments. My favorite concerns the book itself. Upset by her son’s increasingly disturbing fascination with Mr. Babadook, Amelia rips up the book and throws it away. Soon after, it reappears on her front step. It’s repaired, and new pages have been added—pages that show her, under the influence of Mr. Babadook, killing both her dog and Samuel and then slitting her own throat. It’s surprisingly effective for something that is done in the style of a child’s pop-up book.

The most interesting thing about it is the central idea—that the monster is completely harmless until you are aware of its presence, and then it exerts increasing influence over you. It shares a little bit of DNA with a movie like It Follows. I mean that in only a good way.

There’s a great deal here that is very effective. Essie Davis is great in this role. She is initially sympathetic. She’s alone and dealing with a difficult child and a difficult job. Her life is hard and ugly and painful in almost every way. Once she has, for lack of a more relevant way to put it, stopped social distancing with Mr. Babadook in spirit, her personality changes dramatically. She becomes shorter with Samuel, and the aggressive and threatening. Her behavior becomes erratic as well. Noah Wiseman is similarly good in this role. Part of the reason he’s so effective is because he really is an annoying kid. He talks constantly, screams, yells, and says embarrassing things to whomever is walking past. It’s a bit of a thankless role, but he makes it work.

I enjoyed this a great deal. It’s a smart film that offers a very interesting premise and an equally interesting resolution. There’s a reason it’s gotten all the acclaim it has. Now, what we really need is for women directors, particularly those who are directing horror movies, to be given the reins of a lot more movies with real ideas like this one.

Why to watch The Babadook: It’s a great idea clearly delivered.
Why not to watch: If you don’t like horror, you won’t like this.