The Title is the Most Shocking Part 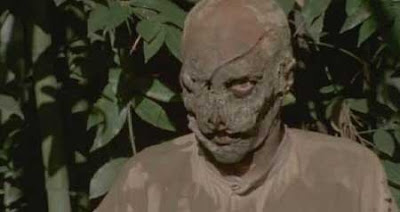 Where do I even start with a movie like Zombi Holocaust (also known as Zombie Holocaust, and, in a severely edited version, Doctor Butcher M.D.)? I already think that a great deal of Italian horror is just an excuse for meaningless gore, and with a name like this, I didn’t really think I was going to get anything different. In fact, one of the reasons I grabbed this before going into quarantine was as a way to make myself watch this. I’d checked it out from the library before and just couldn’t bring myself to watch it.

Really, this is everything you expected from a movie with any of these names, or any of the other names (Zombie 3, Island of the Last Zombies, Queen of the Cannibals) under which it was marketed. The bar is set pretty low here. There’s a lot of gore, a substantial amount of Day-Glo blood, and a soupçon of nudity. There’s not a great deal in the way of plot, at least in any way that would matter. Plot, after all, just gets in the way of the gore, blood, and tits.

We start in New York City and a rash of bizarre crimes. Bodies in morgues are suddenly missing body parts. Eventually, a man is caught removing the heart from a corpse and starting to eat it. It turns out that he, and the other people perpetrating these crimes, are natives of the Molucca Islands. Lori Ridgeway (Alexandra Delli Colli) is a morgue assistant, and just happens to be an expert in anthropology, and also just happens to have grown up in the Moluccas. She joins a team with Dr. Peter Chandler (Ian McCullouch), Chandler’s assistant George (Peter O’Neal), and George’s reporter girlfriend Susan (Sherry Buchanan) to head to the Moluccas to investigate what looks to be a revival of a cannibal cult.

In the Moluccas, they are met by Dr. Obrero (Donald O’Brien), who gives them directions to the island where the cannibals allegedly live. He also gives them local Molotto (Dakar) to act as a boatsman. Of course they wind up in the wrong place and are soon hunted by cannibals. Their guides are soon killed and gutted, and the remaining group becomes hunted by the locals, who (because that’s the kind of movie this is) more or less eat people while the people are dying.

Oh, and there are zombies. These aren’t human eating zombies, but much closer to the traditional Voodoo zombie, except that they are very clearly reanimated corpses, in that they are more or less rotting. They aren’t brought back by magic or powders but by “SCIENCE!” of the movie variety, although we don’t really know that until the very end. It’s honestly not that spoiler-y, since this movie doesn’t so much have a plot, but things that happen in sequence.

The big draw for Zombi Holocaust is the absolutely mindless gore. It all happens for no real reason other than that’s what people want to see. We’ll get throat slitting, eyeball gouging, scalping, organ removal, and so much more. There’s also completely gratuitous nudity, although not a great deal of that. I’m sure that’s there to placate the people who expect full-frontal in their Italian bloodbaths.

Surprisingly, Zombi Holocaust is actually a lot more coherent than a number of Italian horror films. I think the main reason for that is it doesn’t really try to do too much. It has the sort of plot that could be elucidated on one side of an index card with room to spare. Because it’s not that ambitious in terms of story, there’s a lot less for it to screw up or not explain. What happens is kind of explained. There’s even a native symbol that shows up throughout the film. It looks like something someone had their kid draw, but it actually turns out to have a real meaning by the end. No one was more surprised by this than me.

The thing is this, though--Zombi Holocaust isn’t that good. It’s the sort of movie made specifically to gross people out, or to give gorehounds something to watch that they might not have seen before. While that’s perhaps as ambitious as I would want this to get, there’s not really much to recommend it. Even that ambition, cheap as it is, fails in the main, because the gore isn’t that novel for the most part. It’s just the same gross stuff happening over and over.

I mean, if you love gore, knock yourself out. Just don’t expect it to be anything you haven’t seen better or more realistic.

Why to watch Zombi Holocaust: You haven’t gotten your fill of red paint substituted for blood.
Why not to watch: There’s really nothing to recommend it.

Posted by SJHoneywell at 2:22 PM