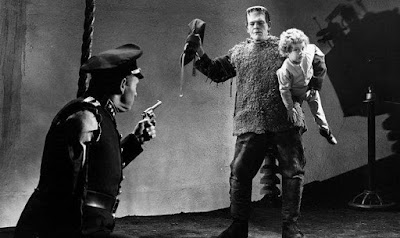 One of the great characters in Mel Brooks’s Young Frankenstein is the local police inspector with the trick arm played by Kenneth Mars. I’d always considered him just a concoction of Brooks’s fevered imagination until today, when I watched Son of Frankenstein, the third movie in the series and the last, I believe to feature Boris Karloff as the Monster. It turns out that just as the peasant played by Gene Hackman was a riff on Bride of Frankenstein rather than the original, the police inspector who had his arm ripped off by the monster is canon as well. They even play darts!

Awesomely-named Wolf von Frankenstein (Basil Rathbone) has inherited the family castle and has moved his wife Elsa (Josephine Hutchinson, the character name being an obvious nod to Elsa Lanchester) and young son Peter (Donnie Dunagan) to start life anew. The townspeople of the village of Frankenstein are none too happy that someone has returned to the family home, especially when that person is the son of the feared and hated Baron who created the Monster. The Frankensteins are given a cold reception by the townspeople, notably the Burgomaster (Lawrence Grant) and the aforementioned Inspector Krogh (Lionel Atwill).

Up at the castle we meet Benson (Edgar Norton), the family butler, who informs Wolf that he had to bring in servants from Tyrol because none of the locals would work at the castle. We also meet Ygor (Bela Lugosi), who hangs around the castle since he has nowhere else to go. Years before, Ygor was hanged for his crimes and declared dead, but somehow survived. Sicne he was declared dead, he’s above sentence for those crimes. Mysteriously (at least in the context of the movie), six of the eight men who convicted him have died under strange circumstances.

Anyway, we soon learn that the reason Ygor hangs around the castle is that the Monster (Karloff) is still around. He’s wounded for some reason, though, and is more or less dormant. He’s still alive, but he can’t really move. Wolf does a full examination of the monster and determines (of course) to carry on his father’s work. And when he does, Ygor is determined to use the Monster to finish carrying out his plans of murdering the men who convicted him.

Truthfully, there’s not a lot of surprises in Son of Frankenstein. You can generally guess who is going to die and how it’s going to happen, for instance. We also learn there is a boiling sulfur pool in the caves under the castle and near the lab. Pools or vats of bubbling chemicals or acid are, after all, the Chekov’s gun of old school horror movies. You know someone is going to take a dip in the sulfur pool before the movie ends, right?

The four central performances here—Rathbone, Lugosi, Karloff, and Atwill—are the real reason to watch this. Karloff, despite this being his final performance as the Monster, has really settled well into the role. Oddly, the decision was made to make him essentially mute again. It’s one of the better performances of Lugosi’s up-and-down career. He’s manic, but measured, something that couldn’t always be said about him. Atwill comes to closest to comedy, but he doesn’t get all the way there. By the end, it’s clear that is Inspector Krogh is not a comic character. For his part, Rathbone is wildly entertaining, running just close to the line of controlled madness. For as much fun as everyone is, he’s the one to watch, especially acting against Atwill toward the end.

The truth is that you almost certainly know where this is going and how it’s going to get there, and it does exactly what you think it’s going to do. By the end of the film, anyone who is monstrous will be dead, anyone who is redeemable will survive, and somehow, all of the bad guys will survive to the next film no matter how thoroughly and completely they were dispatched in this one.

Why to watch Son of Frankenstein: A surprisingly good continuation of the story.
Why not to watch: Where the series goes after this.