Films: The Curse of the Werewolf
Format: DVD from Nippersink District Library through interlibrary loan on downstairs television. 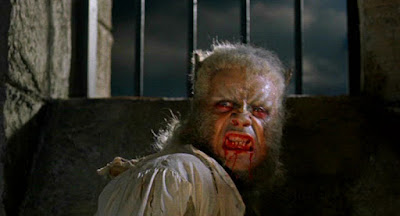 Of all of the monster genres, werewolf movies might be the most interesting to me in a lot of respects. There are dozens of takes on the vampire myth, many different Frankenstein stories, but werewolf stories all tend to have one aspect in common: they are almost uniformly tragic. It’s something we get from The Wolf Man when the old fortune teller says “Even a man who is pure in heart and says his prayers by night, may become a wolf when the wolfbane blooms and the autumn moon is bright.” That’s the tragedy of the basic story. No one chooses to be a lycanthrope, but is cursed to become a beast beyond their control. This is exactly the ground we’re going to travel for The Curse of the Werewolf.

To get there, though, we’re going to have to take a very strange path. We start with a beggar who shows up in a town just as the local marquis is getting married. The marquis is uniquely cruel and essentially forces the beggar to sell himself to his new wife. Shortly thereafter, the beggar is tossed in the dungeon and forgotten, which indicates that the new marchioness isn’t much better than her husband. The beggar is kept alive by the jailer and his mute daughter. Eventually, the jailer dies and the girl becomes the beggar’s only contact. Eventually, with the marchioness gone, the young girl finds herself serving the marquis, who naturally attempts to assault her (and since she is mute, she can’t object). She refuses him and is thrown into the dungeon where she is naturally raped by the now-insane beggar. She is released, goes back to the marquis, and kills him before running off.

Eventually, the girl is picked up by a kindly old man named Alfredo Corledo (Clifford Evans). He and his housekeeper (Hira Talfrey) take the woman home and care for her, and soon discover that she is pregnant. She is nursed back to health, but naturally dies in childbirth on Christmas. Teresa the housekeeper is sure this is a bad sign because an unwanted child born on Christmas is going to be cursed. And so yes, we’ve had to jump through all of these hoops to get to the actual curse going on here, because our child born on Christmas is going to be our werewolf.

We get our first taste of this when the boy (played initially by Justin Walters) starts killing goats in the area at night. What we learn is that love will prevent him from turning eventually, but for now, young Leon needs to be restrained during the full moon.

We doodley-doop into the future about a dozen years and now Leon looks a hell of a lot like Oliver Reed. He goes out into the world to discover his fortune, evidently having been at least temporarily cured of his lycanthropy. He gets a job at a winery and, of course immediately falls in love with the vintner’s daughter Cristina (Catherine Feller), who is naturally engaged to someone else. Denied the love that he needs, Leon starts again turning into a werewolf and starts killing once again.

The Curse of the Werewolf is interesting for a number of reasons. One of these is that the film manages to wait until pretty much the end to give us a good look at the werewolf. There’s no surprise who the werewolf is, but he’s pretty much hidden until the third act. That’s often a sign of clever filmmaking, although in this case it might be to make sure that the audience is fully involved in the story before the reveal. Bluntly, Oliver Reed is a weird looking werewolf. A big part of that is that the filmmakers decided that Reed should be more or less an albino werewolf.

That’s really my main complaint about the film. Everything else here works pretty well, including the idea that werewolf movies should be inherently tragic. The Curse of the Werewolf gives us a werewolf story that delivers in pretty much every aspect. Admittedly, Reed is a weird looking werewolf, but everything else is exactly what you want from this genre and era.

Why to watch The Curse of the Werewolf: It hits the right tone for a werewolf story.
Why not to watch: Oliver Reed makes a goofy-ass werewolf.

Email ThisBlogThis!Share to TwitterShare to FacebookShare to Pinterest
Labels: horror, Terence Fisher, The Curse of the Werewolf