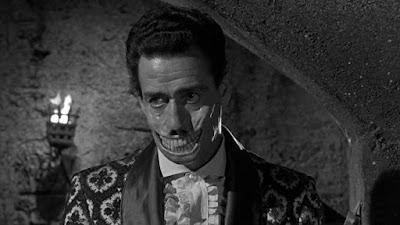 I am not someone who believes much in the concept of the “guilty pleasure.” No, I affirm that the movies I like are movies that should be enjoyed. Even movies I know are objectively bad--Soldier, Kung Pow: Enter the Fist, Pootie Tang--are ones I freely and happily admit that I enjoy. And so, it’s without irony and without any shame that I say that I love the work of William Castle. Castle’s movies for the most part weren’t that good objectively. What they were, though, was filled with gimmicks. From the electrified seats of The Tingler to the “Fright Break” of Homicidal, Castle was a genius of weird gimmicks and promotions. His greatest may well have been the “Punishment Poll” designed for Mr. Sardonicus. We’ll get to that in a minute.

Our film opens with Castle himself talking to the audience about what they should soon expect from the movie they are about to see. We’re going to be going back in time to the late 19th century in London, where we will meet Sir Robert Cargrave (Ronald Lewis), a skilled doctor assisting a young patient. Cargrave is dedicated to his work, but when he receives a letter from an old flame, he cancels all of his appointments indefinitely and heads to the Continent. Here he is taken to the castle of Baron Sardonicus (Guy Rolfe), who has married Cargrave’s ex-fiancee, Maude (Audrey Dalton).

We learn a few things right away about Baron Sardonicus. First, he wears a mask at all times around other people. Second, he is frequently cruel to his servants, performing strange experiments on them with leeches, often headed by his main servant, Krull (Oskar Homolka). Third, he has sent for the doctor for a reason—he has a terrible condition that Cargrave may be the only person alive with skill to solve it.

Eventually, a good half way through the film, we discover exactly what the problem is; I’ve saved you the trouble by showing you in the picture above. Sardonicus weaves a tale about how he came to his fortune, the fate of his first wife, and the story of how his face became that terrible rictus. Suffice to say that it’s the sort of story that would work in some short fiction by Edgar Allen Poe, but not much else. It has the ring of someone’s mother saying, “If you keep making that face, it’ll stick like that.” There are also shades of Gwynplaine here, but without the tragic backstory.

So, the whole movie is essentially Baron Sardonicus forcing Dr. Cargrave to come up with a cure for his face. Cargrave tries his remedies that have worked for other patients, but to no avail. And here is where we are going to learn just how terrible a man Baron Sardonicus really is. In effect, he threatens that he will perform surgery on his wife to give her the same rictus if Cargrave will not try experimental procedures on him to cure him. Additionally, he tells the doctor that if the procedures do not work or he is killed, Krull is instructed to torture both Cargrave and Maude to death. Thus sufficiently threatened, Cargrave gets to work.

The gimmick here is the aforementioned “Punishment Poll.” Just before the conclusion of the film, Castle comes back and talks to the audience again. We are told that, since we were given a thumbs-up/thumbs-down card on entry, we should hold it up now to see if we get an ending that gives Sardonicus mercy or punishment. It’s a cute gimmick as Castle talks to the audience, telling certain people to hold the cards up higher, and pretending to count votes. And then, of course, we get the ending that Castle wants us to have. For all of the pretense of a poll, there’s only one ending to Mr. Sardonicus, and there was only one ending ever.

Look, this isn’t going to change anyone’s opinion about movies. It’s fun. It’s a carnival ride like all of William Castle’s films. We know we’re getting tricked and we don’t care because we’ve paid, with our money and/or our time to get tricked. That’s all a part of the fun. We know that everything Castle does is hokum and mirrors, that all of the razzle-dazzle we are promised is cardboard and paint. And it doesn’t matter, because that’s exactly what we want from William Castle, and he delivers.

It’s not a great movie, but it’s a fun one, I and enjoyed watching it. There’s no need to see it a second time, but it’s not really that kind of movie, is it?