Films: His House
Format: Streaming video from NetFlix on the new internet machine. 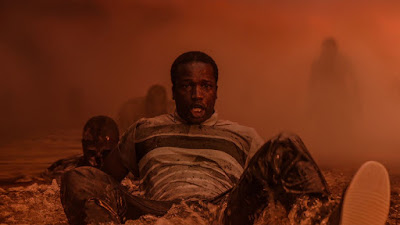 Recently over on his website, Dell posted a list of new horror movies he’d seen, most of which he recommended. I’ve heard of most of them, but had not really heard of His House, which also seemed like the one that sounded the most interesting to me. Dell and I don’t agree on every movie, but I’ve come to trust his opinion in general. Additionally, right now, most of the best horror movies are being produced and directed by women and people of color. Horror is always a reflection of the fears of the time. In America right now, the fears of women and people who are not white are intense, intensified, and needing expression. And that’s true in the U.K. as well, where many political realities are similar to those in the U.S.

His House follows Bol (Sope Dirisu) and Rial Majur (Wunmi Mosaku), two refugees from Sudan, as they are brought to London provisionally in the hopes of them staying permanently. We discover that the trip has cost the life of their daughter, Nyagak (Malaika Wakoli-Abigaba). The Majurs are given a house to live in and are presented with a huge list of rules. They have a small amount of money they will need to use to live on. They are not allowed to have jobs or make money a different way. They need to report in every week to their caseworker Mark (Matt Smith). And finally, they cannot move from the house where they are placed. For some reason, their house is quite large, and they are not asked to live with other people.

But that may be just as well, because the house appears to be haunted. As Bol and Rial attempt to assimilate, they find that something from their past has followed them from the Sudan. Actually, it is Bol who tries to assimilate. It is he who wants to sit at a table and eat with utensils while Rial prefers to eat on the floor using her hands, as is traditional. But their assimilation or resistance to the same is affected by the presence of something else in the house. Bol seems to see it first, but since Rial spends almost all of her time in the house, it is she who encounters the spirit more often and at greater depth.

In Rial’s opinion, the spirit is an apeth, or a night witch. She tells a story of a man from her village who stole from others to build his own house and eventually stole from an apeth as well. Doing so allowed the apeth to move into his house with him. Now an apeth has followed them, and is accusing them of stealing like the man in the story. Rial is told that if she will pay the debt she owes, Nyagak will be restored to her.

His House is very much about a lot of things. It’s about what is happening and has happened at various times and places in Africa. It is a film that is very much centered on being an African story, and specifically one that could only be told from certain African cultures. This could have been set in Liberia or Rwanda just as easily, because of what this film is truly about. This is not about war or genocide, and not even about the survivors. It’s about their guilt. The apeth is coming to them because they have stolen. And what they have clearly stolen is their chance at a life in a place where war and murder are not daily occurrences.

So, for me, His House is mostly about this guilt of being the one who has had a chance to walk away from the terror that killed so many. Bol finds himself tormented by the ghosts of his past, by the people who died and who he could not save. Rial is similarly tormented, but much more with feelings of guilt and shame than with fear. Both characters are living with the knowledge that they have survived and gotten out, and it’s those ghosts of their past that are visiting them in their present. The question is whether or not they can learn to live with those ghosts.

A great deal of horror is about lived experience. The things that scare you aren’t always going to scare other people, and your lived experience will be very different from that of someone else. In His House we are seeing what happens when people fail to come to terms with their own actions and with the consequences of those actions. How do we deal with the guilt and shame of surviving when someone else—potentially someone much better, smarter, or more compassionate than we are is killed? Why should we be the ones to continue while other lives are cut short?

Both Mosaku and Dirisu are nearly perfect in these roles. Dropped into a new world, they are a contrast on how best to deal with the conflicts. Dirisu’s Bol tries to leave the ghosts of his past behind by becoming as much like the people around him as he can. Mosaku’s Rial tries to embrace that culture and past, even coming close to coming to terms with those she left behind.

We all have ghosts in our past, although hopefully without this much baggage. This is a smart film, and a genuinely scary one up until the closing credits. Those last few shots are as scary as anything I’ve seen since 2019.

Why to watch His House: It’s as good a modern horror movie as you’re going to find.
Why not to watch: No good reason.

Posted by SJHoneywell at 9:24 AM