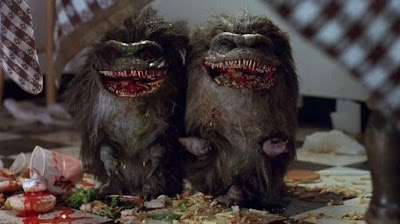 The order that one sees films in is often important. We will frequently look at one film as being derivative of another when the influence should go the other way. For instance, I would love to tell you that Critters follows the same formula as films like Arachnophobia and Tremors, but this came out four years before both of those films. It also has a lot of similarities to The Hidden, but it predates that film by a year. Instead, Critters is very clearly influenced by Gremlins to the point where it’s very much an adjacent film, a sort of spiritual sequel with a much larger science fiction element. It’s closer to the truth to say that it’s a shuffled deck of cards, half Gremlins and half Buckaroo Banzai, with perhaps an element or two of Ghoulies.

We start in outer space where some prisoners are being transferred to the outer space equivalent of a prison. The creatures, known as Crites or Krites depending on whether you’re looking at IMDb or Wikipedia steal a spacecraft and escape, naturally heading to Earth. A pair of bounty hunters are sent to recapture them.

The C/Krites eventually land in Kansas near the farm of the Brown family, who are a stereotypical movie family of four. Dad Jay (Billy Green Bush), mom Helen (Dee Wallace Stone), older child April (Nadine Van der Velde) and younger son Brad (Scott Grimes) are living their lives, not prepared for what is about to hit them. The creatures are, among other things, ravenous, devouring everything in their path.

We’ll get some hints of this when Dad Brown is attacked in the basement by the creatures. Meanwhile, sister April is attempting to have a literal roll in the hay with her boyfriend Steve (Billy Zane!) when the creatures attack and kill him. The creatures also manage to kill off the local deputy (Ethan Phillips). On the positive side, all of this is validation for the local drunk, Charlie (Don Opper), who for years has been claiming to be picking up alien broadcasts through his fillings.

Anyway, eventually everyone is going to come together on the Browns’ farm, with the two bounty hunters taking the physical appearances of Charlie and popular rock singer Johnny Steele (Terrence Mann) along with the local sheriff (M. Emmet Walsh), all with the goal of finding and destroying the C/Krites.

Truthfully, Critters is pretty much exactly what you expect it’s going to be. It’s going to have the same kind of plot structure as Gremlins because it’s very much a “creatures from outer space” version of Gremlins. While the characters are going to be in danger throughout the film (Jay Brown gets pretty severely attacked several times), we’re pretty sure that the right people are going to survive. The people who are eventually killed by the critters (and the body count is pretty small) are going to be people we aren’t attached to and that the film can spare. Anyone who has anything like a backstory or for whom we have any emotional attachment are going to ultimately be safe.

And so, Critters is really just a playing out of the tropes that we know are going to play out in front of us. I don’t want this to sound like I was disappointed in this; I absolutely wasn’t. I knew, or was able to predict, virtually all of the beats of the film, but I still enjoyed watching it. It really did feel like someone decided to take Gremlins and make it a little more violent and perhaps give us a little more at stake with the characters. And while there are elements of comedy here, this is far more a science fiction/alien invasion movie than it is anything else.

The creature effects are right out of the era. Now one is going to be fooled that the critters are really anything more than puppets or animatronics. They’re ‘80s movie fun, sort of Muppet-y, but with a hint of real menace to them. Evidently, they were designed more or less with Taz from Looney Tunes as the starting point.

It’s also worth noting that the film’s creator claims that Critters was written before Gremlins was released, and that rewrites were done to reduce the similarities. I can believe this for one significant reason: Critters is good enough that it would work without specifically following Gremlins. It’s silly and goofy, but it’s exactly the sort of “scary” PG-13 fare that was common in the mid-1980s. It’s fun, and the actors play it seriously and in earnest, which helps a great deal.

Speaking of that, the cast is really what sells this. Dee Wallace has a long track record of classic horror movies in her repertoire, and M. Emmet Walsh is always worth watching. Scott Grimes is also surprisingly good for a young kid in a semi-serious/semi-comedic monster movie. As a final note, fans of Mystery Science Theater 3000 might vaguely recognize Don Opper from the movie City Limits, which he also co-wrote. That connection goes deeper than you might think—director Stephen Herek met Critters writer Domonic Muir on the set of City Limits, where they clearly also met Opper. Perhaps they should have let Muir write that film, because this one is actually fun, even if it really does feel like Gremlins without the Gizmo stage.

Why to watch Critters: It’s derivative, but it makes it work.
Why not to watch: It’s really derivative.