They'd Never Try This in Queens

Film: Vampires vs. the Bronx
Format: Streaming video from NetFlix on the new internet machine. 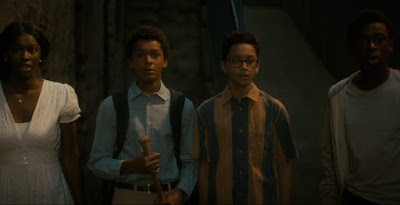 While there are plenty of zombie films since George Romero failed to copyright Night of the Living Dead, There is probably no movie monster with more movies than the standard vampire. Because of this, it’s hard to do something really new with the monster. There are particular tropes we expect when it comes to vampires, and then there are tropes we expect for movies that attempt to do something different. Vampires vs. the Bronx is much more of the first variety. This is, essentially, Attack the Block but with vampires instead of aliens.

We’re going to spend most of our time with Miguel, also known in the area as Lil Mayor (Jaden Michael) and his friends Bobby (Gerald Jones III) and Luis (Gregory Diaz IV). The three of them more or less grew up in the local bodega, run by Tony (The Kid Mero). But the neighborhood is in trouble. More and more of the buildings are being purchased by a new real estate company called Murnau. And, it shouldn’t come as a shock that Murnau is actually run by vampires (after all, it’s named after the guy who directed Nosferatu). The vampires are assisted during daylight hours by Frank Polidori (Shea Whigham) while the kids, especially Miguel, do what they can to save the neighborhood.

Based on this, and with the knowledge that Vampires vs. the Bronx is also in many ways an urban remake of Fright Night, there’s a great deal here that you can guess. Do you think the kids are going to discover that there are vampires moving into the neighborhood? Of course they do. Do you think that no one is going to believe them? That is the standard trope, and we’re going to get all of the tropes. That said, Vampires vs. the Bronx is going to have some fun with those tropes. The kids, for instance, making holy water balloons and finding ways to sneak consecrated hosts out of the local catholic church under the gaze of the local priest (Method Man). Eventually, the kids are going to add a fourth in the person of Rita (Coco Jones), who is the only person who believes their stories.

There are a lot of directions to go when discussing this. In terms of taking the movie on its own terms, there’s not a great deal that you’re not going to see coming here. This is a movie that really does stick to the standard vampire tropes. This doesn’t make it less entertaining, but we’re not going to do anything different when it comes to vampire lore. All of the basic vampire “truths” are going to be here (or at least most of them are—the idea of running water never shows up, for instance) without any real changes. And because of that, we’re going to get garlic and crucifixes and the rest, although admittedly there are a few places where these things are worked in in some fun ways.

But, while this movie is clearly about what the title says it is, you don’t have to dig very far under the surface to see exactly what this is really about. I’m going to dive into spoiler territory here, so consider the rest of this review under a spoiler tag.

Vampires vs. the Bronx is a very thinly veiled allegory (and by thinly veiled, I mean it’s applied with a hammer) for gentrification. There’s a reason, for instance, that all of the humans in this movie are people of color and all of the vampires (including the surprise reveal of new resident and evident overly-friendly neighbor Vivian (Sarah Gadon)) are white. There’s a reason that the vampires, looking for ways to get at the kids, accomplish this by simply buying the building they live in, allowing them to enter it without needing to be invited. The victims of the vampires are in many cases upwardly-mobile people of color, but are also regularly discussed as being people who won’t be missed. This is not subtle stuff.

But it’s also okay. It doesn’t need to be subtle. It is, after all, a vampire film. It’s also rated PG-13, so while there are a few decent scares, there’s very little blood here and absolutely no gore. Even the language is tame for the most part.

I enjoyed this for what it is. It’s not going to change anyone’s life, and if you’re even remotely in touch with cinematic vampire lore, you’re not going to find a single surprise here. But that said, it’s fun, and the kids are all excellent in this. They’re the reason to watch this more than anything else.

Why to watch Vampires vs. the Bronx: It’s fun in the way you want it to be.
Why not to watch: It hits all the tropes.