There's Something in the Water 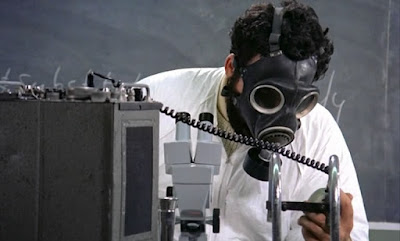 Say the name “George Romero” and pretty much everybody is going to think of the zombie films. If you’re not a horror nerd, it can be difficult to think of anything that Romero did that wasn’t awash in the living dead. The Crazies (sometimes called Code Name: Trixie) is one of those Romero films that is easy to forget or, honestly, not know about. There’s a lot here that feels very much like what you’d expect from a George Romero film, though, including some very zombie-like behavior.

I also have to say that the middle of a pandemic is probably not the right place to watch a film like The Crazies. The elevator pitch is that a plane carrying a deadly strain of bacteria (or a virus—they call it both) goes down near a small down in Pennsylvania. The bacteria gets into the water supply, and over the next couple of days, it starts to affect the townspeople. The two results of being infected are either death or insanity, and those who go insane also become homicidal. Of course, the military shows up to try to shut things down, but in George Romero’s world, the military is as incompetent as everyone else, and things quickly spiral out of control.

Half of our focus will be on the military. True to Romero’s awareness of race at the time, one of the men in charge of the military response, and one of the only competent people in the film is Col. Peckem (Lloyd Hollar), who is Black. Assisting him, and also relatively competent, is Major Ryder (Harry Spillman), while the aggressive and angry Dr. Watts (Richard France) worked on the team that developed the bug and is now working on a cure. There’s a lot of red tape to deal with, though, and all three of these men struggle against what appears to be gross incompetence at the levels above them.

The other half of the film is spent with a group of townspeople. David (Will MacMillan) and Judy (Lane Carroll) are planning on getting married, especially as Judy is now pregnant. David is a local firefighter, working with his friend Clank (Harold Wayne Jones). Eventually, these three will meet up with a father/daughter pair named Artie (Richard Liberty) and Kathy (Lynn Lowry). Because our townspeople are unprepared for the arrival of the new disease, our quintet of locals is going to slowly succumb to the plague as the film goes on. They attempt to get out of the area while the military attempts to shut down everything to get ahead of the spreading disease.

That’s pretty much it. We’re given a situation where we naturally want the military to clamp down on the disease, since it’s one that, actually, spreads a great deal like COVID and has a long gestation period, meaning it can spread across country quickly. At the same time, we also want the locals to get out if they can.

George Romero does a few things really well with his movies. One thing he does well, for instance, is present us with people who don’t look like they belong in the movies. These are very unglamorous people, top to bottom. I try very hard not to make fun of people’s looks in movies. It’s a cheap joke and one that is frequently in poor taste, but honestly, Harold Wayne Jones is an ugly man. For her part, Lynn Lowry looks like someone bought Sissy Spacek on Wish. This is a benefit—these people look real.

One of Romero’s themes—and one that is extremely important in The Crazies--is the idea of government, or at least military, incompetence. This is more than just the incompetene already discussed. The men in the military in this film cannot shoot. Every time they encounter the locals, the locals kill off far more than their fair share of the military. As things spiral out of control, Clank suddenly becomes Rambo, mowing through what feels like a dozen or more troops, who just seem to walk into his bullets like the aliens in Space Invaders.

There’s a lot here that is cheap and/or amateurish, though. The military’s hazmat suits, for instance, have no seal between the hood and the jumpsuit. Everybody is wearing a gas mask, but if the disease spreads in any other way but through the air, nobody is going to be safe with their dime store protective gear. This might be a function of the budget, or might be just Romero being Romero.

This was a solid movie. The remake from 2010 is similar in a lot of ways, and better in a number of ways, honestly. It’s slicker and a lot more violent, but it’s also a lot less nihilistic, which I respect. Still, the original version was worth seeing.

Why to watch The Crazies (1973): “Government is evil” stories always sell.
Why not to watch: Like a lot of early Romero, parts are very amateurish.