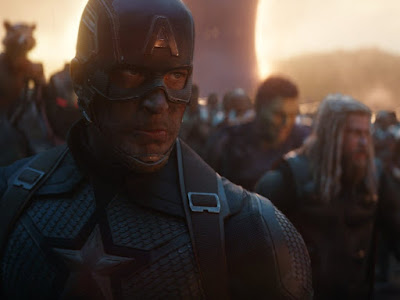 Well, it was a long time coming. When Jon Favreau directed Iron Man in 2009, who knew that a decade later we’d be ending the huge character arc of dozens of characters in a three-hour epic? I mean, I guess someone might have foreseen this, or decided that this was where we were going to end up, but I doubt it started in 2009. But Avengers: Endgame was the wrap-up of a 22-movie arc of multiple intertwined characters and stand-alone series that make up the MCU. Well, technically, this is the 22nd movie in a 23-movie arc, since Spider-Man: Far From Home is considered part of the MCU Third Phase. Still, the MCU is moving into the next part of its evolution, but Endgame really does feel like the end of something huge, well, because it is.

Much like the Harry Potter series, it feels like half of Hollywood is in this movie. The “let’s show everyone who is in this” scene at the end, which short shrifts a chunk of the cast but gives huge sexy poster shots including the actors’ signatures for the original Avengers, goes on for what feels like five minutes. It’s a lot like the multiple endings of The Lord of the Rings. It’s extensive, but it also feels kind of necessary after all we’ve been through.

So here’s the thing: just for my own sanity, I’m not going to do a lot of plot summary here. There are a lot of characters involved in this movie, and a lot that would need to be explained, including the previous movie. If you haven’t seen this or the previous Avengers: Infinity War, what follows is going to be pretty much all spoilers. You’ve been warned.

The movie starts just post-Snap from Infinity War with one of the more tragic scenes in the film. Hawkeye (Jeremy Renner) is having a quiet day at home with his family when the Snap happens, and his entire family vanishes. All of them. From there, we learn that the unsnapped Avengers, or at least some of them, gather together to find out where Thanos (Josh Brolin) has vanished to. They locate him and hunt him down only to learn that he used the Infinity Stones to destroy the Infinity Stones, meaning that the murder of half of the universe’s population cannot be undone. In a fit of rage, Thor (Chris Hemsworth) kills him.

From here we flash five years into the future when a freak accident releases Scott Lang/Ant-Man (Paul Rudd) from the Quantum World. For him, only five hours have passed, so when he arrives, he is unaware of the Snap. However, he realizes that the quantum world can be used to essentially time travel. If they can figure out how to work the quantum, they can go back in time and essentially steal the Infinity Stones before Thanos gets them—but there is resistance from Tony Stark/Iron Man (Robert Downey Jr.), since in the five years since the Snap he has gotten married and had a child.

And really, that’s the movie. We’re going to end with a giant climactic battle, something the Avengers movies are very good about. But getting there is going to instead feel like a sort of heist movie as the characters go back in time in three different groups to grab the stones at different points before Thanos does. Of course there will be problems, and there will be flashbacks that happen in the heart of other movies—we’ll get moments in Guardians of the Galaxy, The Avengers, and Infinity War, for example. Each of these moments will either stay true to those movies or work with them in interesting ways to maintain the integrity of the original story. Regardless, once we get to the end of the heist movie, we’ve still got a good 45 minutes or so of movie left that will be taken up with the Big Fight and then a series of denouements to get us to the final credits.

Here’s the thing—unless Avengers: Endgame was utter shit, it was going to be worth seeing. While not everything in the MCU has been brilliant, the movies have been consistently good throughout. This is the culmination of that, and there are a lot of threads that fly together. It’s smart that, with the exception of a couple of characters like Ant-Man and Rhodey/War Machine (Don Cheadle), the real focus here is on the original six Avengers. Many of the characters show up for just a cup of coffee at the end—Nick Fury (Samuel L. Jackson) who has been a running thread through the series—doesn’t even have a line in this one.

Where this succeeds is in giving us completed character arcs for the main Avengers. We get something like completion for Iron Man, the Hulk (Mark Ruffalo), Hawkeye, Black Widow (Scarlett Johansson), Thor, and Captain America (Chris Evans). All of these characters at the end feel like, much like the first three phases of the MCU, that their stories have been told so that we can move on to the new characters and the new versions of the old characters.

It’s good. There are moments in it that really do feel like the culmination of ten years of waiting and ten years of fandom. Even if it sucked I would probably tell you it was good, though. It’s a hard movie to be objective about.