Ten Days of Terror!: Friday the 13th: The Final Chapter 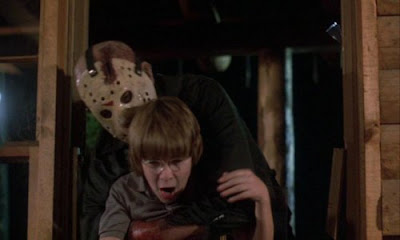 If I told you that I was looking forward to watching the fourth Friday the 13th movie, called Friday the 13th: The Final Chapter, you'd likely think I was lying. A big part of that lack of desire comes directly from the fact that I know it was nothing like the final chapter of the series. There are some really well-done slasher movies, of course, and the original in this series is a classic for a lot of reasons. The second one introduces Jason Voorhees as the killer and the third introduces his now-iconic hockey mask. What the hell could the fourth one offer?

The answer to that is a hell of a lot of dead teenagers. I mean, that was expected given the nature of the series and the placement of this one in the series. There’s going to be a lot of dead kids by the end of it, mostly killed with a variety of bladed weapons. Friday the 13th: The Final Chapter is going to follow the standard “plot” structure of the series. We’ll get a couple of initial kills from Jason, we’ll set up all of the cannon fodder (and the final girl), we’ll have some gratuitous nudity for a bit, the kids will more or less pair off for sex, and Jason will kill them for their sins.

And really, that’s what happens here. We don’t get any of the “Jason is a supernatural killer” vibe through most of it. Jason’s kills throughout are more or less done by rote without much in the way of creativity. Having someone’s head crushed against shower tiles or being stuck in place by a corkscrew to the hand before taking a machete to the face is about all we can expect in terms of what my friends and I would call back in the day “quality kill.” It’s perfunctory carnage done without wit, style, or class. Jason kills because that’s what he does, but unlike many of the other teen slasher icons (like Freddy Kruger), he’s just a joyless, implacable tower of murder.

Are there any positives to this? Sure, there are a couple. It’s entertaining that of the recognizable cast, one is Crispin Glover who, because he is male and has sex, will not make it to the end credits. It’s also entertaining that the other really recognizable face here is very young Corey Feldman. I won’t say specifically what happens to young Tommy Jarvis, but it’s worth noting that for all of the happy teenager death in this film, even these filmmakers wouldn’t stoop that low, would they?

It also has an ending that is supremely ridiculous, even for a cheap slasher. We’re set up early in the film to believe that our young Tommy Jarvis is somehow a miracle worker when it comes to things like movie props. He has a set of masks and things that we’re told he made himself despite them being clearly and obviously professionally-made props. Well, we’re going to get something in the last 10 minutes or so along those lines when Tommy does some true movie make up magic on himself in about two minutes. It’s ridiculous and dumb, and I felt dumber for having seen it. It’s not even funny it a bad way.

Look, I know there are a bunch of these movies. I know that there’s nothing really to expect from them, but because my expectations are so low for them, I at least want to see funny or disturbing death scenes. These are all straightforward and disappointing.

Man, I expected to be bored by this, but not this bored.

Why to watch Friday the 13th: The Final Chapter: It promises an end to the series.
Why not to watch: It lies.