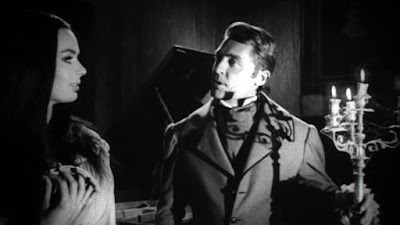 You never really know what you’re going to get into with an older horror movie, and for me, that’s especially true when it’s an Italian horror movie. I don’t always love Italian horror movies, finding them to be much more about the spectacle and very often short on plot and coherence. Castle of Blood (or Danza Macabra in the original Italian) comes from before the era of the giallo, though, and also features Barbara Steele in a prominent role. Steele is always a net positive.

The plot is straight out of the mid-‘60s horror playbook. A journalist named Alan Foster (Georges Riviere) confronts Edgar Allan Poe (Silvano Tranquilli) about the authenticity of his stories. In the world of this film, Poe’s stories are viewed not as fictions, but as eyewitness accounts of the supernatural. Confident that there is no supernatural, Foster takes a bet with Lord Thomas Blackwood (Umberto Raho) to spend a night in the man’s castle. Specifically, he is to spend All Souls’ Eve (otherwise known as All Saints’ Day) in the castle. According to Lord Blackwood, no one has done this successfully; everyone who has attempted it has died.

So, off we go to the castle where Foster is going to spend the night. It’s a pretty standard deserted castle, and, true to form for a haunted castle movie, is soon populated with ghosts that interact with Foster. I mean, we’re going to pick up on this very quickly. Foster isn’t going to be that quick on the uptake. Primary among the people who come to visit him is Elisabeth Blackwood (Barbara Steele), sister of Lord Blackwood. The two are immediately attracted to each other, but she soon disappears. This is going to be repeated for some time, and eventually, Foster is going to catch on. This happens when, over the course of the night, he sees the deaths of all of the ghosts played out. And, of course, he is in danger as well. Why? Because the spirits need his blood so that they can manifest the following year.

Castle of Blood is one of those movies that has some sizable plot holes, but they’re the type that aren’t really noticeable during the running time of the movie. The biggest one is the castle itself. Why does Blackwood keep the castle? How did he figure out that this was a recurring curse? And since everyone who takes his bet dies, why does he keep issuing the bet?

In fact, it becomes evident at one point that Blackwood has given the castle for the night to a newly-married couple on the deadly night in question. Essentially, knowing that it would almost certainly result in their deaths and their continued haunting of the castle, Blackwood offered the place to newlyweds for their honeymoon. That’s disturbingly sadistic.

Eventually, once we have seen all of the deaths of the people who have died in the castle, the spirits come for Foster, herding him through the castle to finally kill him and take his blood. However, Elisabeth has decided that she loves Foster and will do everything she can to get him out of the castle before the end of the night, bet or no bet.

What Castle of Blood does extremely well is create a real atmosphere of fear and apprehension. I expected very little going into this but found that the creation a real sense of tension is by far the movie’s strongest point. The plot is very standard when it comes to haunted building movies, but, for whatever reason, there’s a lot at stake here. Foster’s ridiculous bet is quickly forgotten, and it really does become about both his survival and discovering what is behind all of the deaths in the castle—a question that is honestly never really answered. Seeing the various deaths is as close as we get.

There is also a surprising moment of nudity here; I didn’t expect it, and while it was probably shocking when this was released, it was very tame.

The biggest complaint I have here is that there are chunks of this movie that are untranslated. Suddenly all of the characters are speaking Italian (I think…it’s definitely a Romance language) and the subtitles offer nothing more than “Speaking in foreign language” to tell us what is going on. It would be worth at least figuring out what is being said there—a voiceover covers a little of that at the start, but it’s either an odd choice or just an incomplete job.

Anyway, I should have trusted the presence of Barbara Steele. She hasn’t let me down yet. This one is recommended as far better than it had any right to be.

Why to watch Castle of Blood: It’s far better and more atmospheric than you’d expect.
Why not to watch: Swaths of this are inexplicably not translated or dubbed.