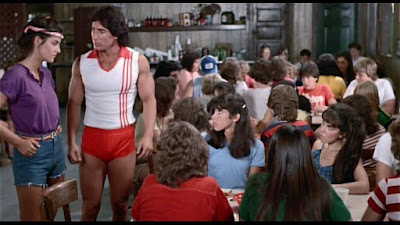 When it comes to summer camp movies, there are a few movies that immediately spring to mind. For comedy lovers, Meatballs might be the go-to. I’d put forward Addams Family Values as the best movie with summer camp scenes, but some might suggest Heavyweights or Moonrise Kingdom. Horror fans are almost certainly going to reflexively name Friday the 13th as their first choice, but here will be a subset that instead goes with Sleepaway Camp.

So, here’s the quick and dirty. John Baker (Dan Tursi) and his kids Peter (Frank Sorrentino) and Angela (Colette Lee Corcoran) are on the lake. An accident kills John and one of the kids, and the survivor is raised by John’s sister Martha (Desiree Gould). We move eight years into the future, and Martha, who is clearly missing several screws, a bolt, and some additional hardware, is sending Angela (Felissa Rose) and her son Ricky (Jonathan Tiersten) off to summer camp. Ricky has been before, but this will be Angela’s first time going. We learn very soon that Angela is disturbingly quiet. In fact, we don’t hear her first word until a good half hour or more into the film.

Anyway, the summer camp is pretty much the worst you can imagine of what summer camps are. The cook is openly a pedophile, for instance, and it seems like the main activity is kinds finding ways to bully each other. And soon, a series of accidents start to thin out the camp’s population. That pedophile cook is attacked and horribly burned by a giant pot of boiling water. Another kid is drowned in what is purported to be a boating accident. But as the body count rises, it becomes impossible to deny that there is a killer loose.

Look, I know that Sleepaway Camp is a beloved movie, but I have to be honest. It’s terrible in a lot of ways. It is one of the worst acted movies I have seen in a long time. It is almost an embarrassment to wooden things with how wooden most of these actors are. Aunt Martha in particular is bad local theater levels of terrible, enunciating things in odd ways, using strange mannerisms…it’s almost inexplicable. Most of the kids aren’t any better. Felissa Rose’s main acting trait is to open her eyes as wide as she can and stare straight ahead.

But I get the charm of this. It’s terrible in an entertaining way. It’s a slasher that, like a lot of the slashers that came before it, is much more suggestive of violence than actually showing us what happens. Oh, there’s going to be some blood, of course, but most of the actual violence takes place just off camera. And, like most slasher movies of the era, the kills are relatively standard—knives, arrows—but one in particular is particularly cruel and vicious, involving a curling iron placed really where someone wouldn’t want one placed.

But Sleepaway Camp is 80 minutes of terrible acting and hinted at bloody deaths to get to one staggering moment at the very end. I’m not going to reveal that here. You know exactly what I’m talking about or you know that there is a moment here that we are building up to.

There’s video out there of Patton Oswalt telling a story about seeing Jerry Maguire with his brother. His brother hated the movie and made that public at the end of the film. Oswalt comments that his favorite comedy is Jerry Maguire--a 90-minute build up to a single joke. Sleepaway Camp is that. It’s 80 minutes or so of build-up to one ridiculous moment of shock.

And, honestly, it works. I get it. I probably won’t watch it again anytime soon, but I get it.

Why to watch Sleepaway Camp: That ending is a classic.
Why not to watch: It is terribly acted.