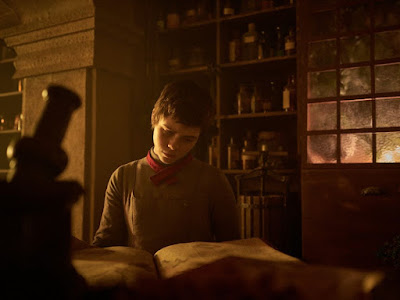 I’ve liked the two films Oz Perkins has directed that I’ve seen. There is a sense that he is very much trying to tap into something deeper with his horror movies, something more than just the surface level jump scare and gross-out moments that are the mainstay of cheap horror films. While perhaps not as high profile as some of the other new horror directors, Perkins has an interesting voice and style. And so it was a disappointment to me that Gretel & Hansel appeared in many ways to be Perkins attempting to riff on Ari Aster.

Clearly, Gretel & Hansel is a riff on the Hansel and Gretel story. You remember the one—two kids are kicked out of their house by their stepmother because of terrible famine. The children wander through the woods until they come to a house that appears to be made out of sweets. Famished, the kids nibble on the house until the owner, a witch, arrives and brings them in. Of course, the witch is cannibalistic and plans to fatten the children up and eat them, but is ultimately outwitted by Gretel. The children find the witch’s treasure and return home with the aid of a swan to discover that their evil stepmother has died, and the live “happily ever after” with their father.

Gretel & Hansel, naturally, is going to include a number of changes. The title is reflective of the fact that it is Gretel (Sophia Lillis) who is the main character here. Rather than having two young children, or even two children of the same age, our Gretel is in her mid-teens with Hansel being closer to 8 or 9. We start, though, with a sort of fairytale about the Beautiful Child. This child was prophesied to die very young, so her parents took her to an enchantress, who saved the girl and imbued her with power. The girl used that power not to merely tell futures, but to kill those who asked, including her own father. Her mother sent her off into the woods where the Beautiful Child lured children to their deaths.

When we get to our title characters, Gretel refuses work in a house because it is clear that she is not being asked to cook or clean but to serve as a sort of sexual plaything for the old man of the house. With this, she and younger brother Hansel (Sam Leakey) are sent away. They encounter a friendly and helpful huntsman (Charles Babalola), who gives them advice. Naturally, they encounter the strange house in the woods—not made of sweets but smelling of cake—and they investigate. It is here they discover the old crone (Alice Krige), who takes them in.

Immediately, Gretel has misgivings. The meals are bountiful with no explanation of where the food comes from. At the same time, the old woman begins to teach Gretel how to tap into her own powers. Of course, all of this is going to require that Gretel deal with her brother—the one thing that is holding her back. And, if you suspected that the opening story about the Beautiful Child is going to be connected to all of this, well, you’ve seen a movie.

Gretel & Hansel is very clearly a feminist reading of the old tale, rearranged to bring out these elements. Why else move Gretel to being older than her brother? In the original story, the children are roughly the same age, but it’s still Gretel who is the active child and the one who rescues her brother. Here, Gretel ultimately controls many of her brother’s actions. This is more than merely putting her name first. Why else make Gretel herself a witch? She is told in no uncertain terms that for her to come into her power, she needs to divest herself of all of her worldly connections, the things that hold her back. In her case, it is Hansel. The subtext here isn’t hard to see. In fact, it’s hard to call it subtext.

The problem is that it doesn’t work. The story is fine and potentially a good and interesting take on an old classic. But that’s not what we get here. Perkins, as I said at the top, has decided to give us something that looks like what would happen if Ari Aster tried to do this story. It looks good, but this doesn’t feel like Oz Perkins. It feels like it’s trying far too hard to be edgy, to be something that wants to be spooky and creepy and weird…and Perkins can do this in his own voice. He’s not doing it here—and it’s to the detriment of the story being told.

I also want to talk for a second about Sophia Lillis. Lillis is one of the latest young actors to become the Hollywood kid of the moment. There tends to be one or two floating around most of the time—Macauley Culkin was one, River Phoenix, both of the Fannings, Abigail Breslin, Freddie Highmore…the list goes on. Lillis has been in a bunch of high-profile projects. She’s fine in this, despite the fact that her accent doesn’t match that of anyone else.

The message here is potentially a good one, as is the movie. The execution leaves a great deal to be desired.

Why to watch Gretel & Hansel: A new, feminist reading of the classic fairytale.
Why not to watch: Oz Perkins needs to trust himself.