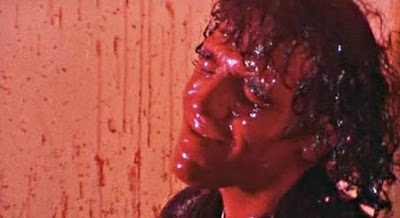 Every now and then, you find a movie that feels like it comes with its own oil slick. The Driller Killer is that kind of a movie. I’m not going to say this is a bad thing or a good thing, but it is very much a true thing. This might be the grimiest movie I have ever seen, and that includes the lesbian shower sequence. The Driller Killer looks and sounds like it’s straight off the grindhouse circuit; I’m actually a little surprised there weren’t a couple of “scene missing” interstitials.

The Driller Killer is about an artist named Reno (played by the film’s director, Abel Ferrara under the pseudonym of Jimmy Laine). Reno is working on a new major piece, but he and his two roommates, flight attendant Carol (Carolyn Marz) and her drug addict lover Pamela (Baybi Day) are having trouble making the rent and paying their bills. Reno asks for $500 to cover the rent from his art dealer, who reminds him of all of the money he has already borrowed from him. However, the art dealer, Dalton (Harry Schultz II), promises that if the piece Reno is working on is good, he will buy it for the appropriate amount at the end of the week.

Shortly after this, a band called Tony Coca-Cola and the Roosters moves into the apartment next to Reno and his roommates. They practice constantly, disturbing Reno and preventing him from being able to finish his massive painting. Reno complains to the building super (Alan Wynroth), who tells him that without the rent money, there’s nothing he can do. However, as a nod to goodwill, he gives Reno a skinned rabbit to eat, one of the first conscious nods this film makes to Repulsion.

Anyway, Reno’s mind starts to splinter. He starts seeing visions of himself covered in blood and his roommate Carol with her eyes removed. Possessed of a new compulsion, Reno purchases a battery pack and heads out into the neighborhood and starts murdering the vagrants he comes across with a power drill. He does this a number of times, frequently in alleys, but more than once simply out on the street where he could possibly be observed. There’s a lot of blood here. There’s not an real gore, but there is a tremendous amount of red paint being splashed around.

But here’s the thing—that’s really all there is to The Driller Killer. There’s no more plot than I’ve just elaborated to get you through to the end. Reno goes out and kills vagrants while his world crumbles around him and everyone who has some meaning to him either walks away from him or abandons him in some other way. There’s not even any real resolution at the end, and the fates of several characters are left implied but ultimately ambiguous.

As I said above, this is a grimy film. It has the grainy look of a grindhouse epic, filmed on whatever cheap stock was available. Everything about it feels soiled in some way. As I mentioned above, there is a short lesbian shower scene here (Carol and Pamela, who, based on everything else that happens, are clearly a couple but not exclusive), and even that feels grimy, like they need another shower, but somewhere else. You can almost feel the black mold just off camera, and get the sense that the towels they’re using are mildewed.

I honestly didn’t have tremendously high expectations for The Driller Killer, but I did expect to have something that had a beginning, middle, and end. We don’t really get a real ending here, and while the ending being ambiguous and simply ending is certainly more realistic, it’s also completely unsatisfying. This is a film that doesn’t really go anywhere.

This is more a vision than it is an actual movie. There’s something here that wants to get out, and there’s certainly enough oil on the film for just about anything to slide through the opening, but there simply isn’t enough here to be more than just Abel Ferrara killing bums with a power drill. It’s two-thirds of a movie at best, and needed something more to just bring it all together.

Normally, I say something like “this is a movie I respect more than I like” or “I want to like this movie more than I do.” Neither of those is true. I don’t really like or respect this and I don’t want to like it. I want a shower, and possibly a wire brush.

Why to watch The Driller Killer: I don’t know that there’s anything else like it.
Why not to watch: If ever there was a film that was cockroach-infested on the celluloid, it’s this one.