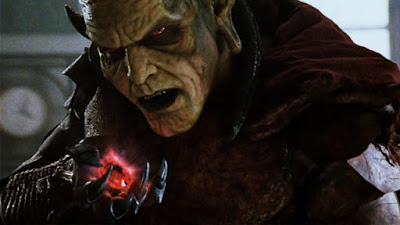 For many a horror movie, the difference between success and failure comes down to the quality of the monster. The Hellraiser franchise would be nothing without Pinhead. More specifically, it would be much less without Doug Bradley’s specific interpretation of Pinhead. The same is true of Robert Englund and Freddy Kruger. I like Jackie Earle Haley as much as the next guy, but there’s a reason that the remake of A Nightmare on Elm Street isn’t considered that interesting, and the fact that Englund isn’t playing Freddy is a part of that. This is one of the main things that Wishmaster got right. This is not a particularly scary movie or even a particularly good one, but casting Andrew Divoff in the role of the djinn is an absolute triumph of casting.

We get an opening scene to more or less introduce us to the idea of a djinn, and it’s here that we’re introduced to the basic premise of the film. The idea is that we tend to think of genies in terms of, say, Disney’s Aladdin, but the ancient stories are much more vicious. Djinn are creatures that must serve when commanded, but will always strive to grant wishes in the worst way possible, a sort of malevolent and consciously evil monkey’s paw. The story that the film wants to put forth is that someone who releases a djinn can receive three wishes, but upon the third being granted, all djinn are able to freely enter the mortal world and, more or less, destroy humanity.

In the modern age, an art dealer named Beaumont (Robert Englund) has acquired a statue of Ahura Mazda and has had it shipped to the U.S. The crane operator has been drinking, though, and as he is lowering it from the ship to the docks, tragedy strikes. The cables snap and the statue falls to the ground, killing Beaumont’s assistant (Ted Raimi) and revealing a large gem—the prison of the djinn from the opening scene. Eventually, that gem winds up in the hands of Alexandra Amberson (Tammy Lauren), an appraiser for an auction house. Her investigation into the gem is what awakens the djinn, so she is the one who will have to have three wishes granted for the djinn to destroy the world. However, her friend and possible romantic partner Josh (Tony Crane) is the one who actually causes the gem to shatter, and is the first victim when the djinn kills him as he requests an end to his physical pain.

And that’s how things are going to go. Alexandra is going to get visions of the djinn as it tracks her down, since it is she who needs to ask for wishes to be granted. Along the way, the djinn will grant wishes to others—a store clerk, a med student, a homeless man—to help him charge and repair the gem. He needs souls for his magic to work, after all. Meanwhile, Alexandra does what she can to learn about the creature.

Truthfully, Wishmaster isn’t a great movie, but it is pretty good fun. Part of that is the number of cameos of horror movie stars. Ted Raimi and Robert Englund are just two of those. We will also get Tony Todd as a doorman, Kane Hodder as a security guard, and George “Buck” Flower as the homeless man. The opening scene is also narrated by Angus Scrimm. It’s sort of a horror movie greatest hits reunion.

But for all of the cheesiness, there’s a lot here it really is fun, and most of that comes from how much fun Andrew Divoff is having in the role as the djinn. He’s fun when he’s made up as the creature, but he’s so clearly having a good time when he is instead masquerading in the role of a person. Everything about his performance works for the character—the sardonic smile, the constant cigarette, the deep and gravelly voice—and he’s so clearly relishing everything that he’s being asked to do. A big part of the fun is also how innocently most of his victims fall into his traps. They aren’t in many cases really wishing for something, but just expressing normal human desires, but for the djinn, that’s enough.

Still, I had fun with this. The creature is a great cinematic creation, and to the film’s credit, it resolves really well. The ending is entirely plausible and works well within the created mythology. If nothing else, the movie completely succeeds in that respect.

Why to watch Wishmaster: Such a great villain!
Why not to watch: The gore is unnecessary.