Films: The Phantom of the Opera (1962)
Format: DVD from Nippersink District Library through interlibrary loan on basement television. 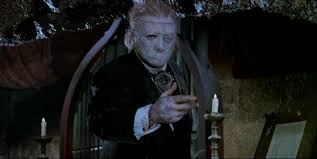 One of the things I find interesting in looking at different variations of the same story is those variations. For instance, the original Invasion of the Body Snatchers takes place at the beginning of the eponymous invasion. The first remake seems to take place a lot further into the alien takeover. But the story is essentially the same. Other times, the remake is wildly different from the original. The John Carpenter remake The Thing has the basic skeleton of The Thing from Another World, but is considerably different. The 1962 version of The Phantom of the Opera is nothing like the others that I’ve seen. It’s a kinder, gentler Phantom, and I’m not convinced that this is an improvement.

The basics of the story that you almost certainly know are here, though. There’s an opera, after all, and a phantom who haunts the theater. There is an ingénue who the Phantom will attempt to take under his cape, and there will be some terror and death when the Phantom doesn’t get his way. But there’s a hell of a lot else here that is going to be very different from what you likely know.

In fin de siècle London, opera writer Ambrose D’Arcy (Michael Gough) is upset with theater manager Lattimer (Thorley Walters) has not completely sold out the theater for his opening night. Lattimer protests; the empty box sits empty because everyone believes it to be haunted. Producer Harry Hunter (Edward de Souza) attempts to mollify his star, Maria (Liane Aukin), who does go on. But the show comes to an abrupt close when a stagehand appears hanged on stage.

Maria refuses to sing again, and so we are introduced to Christine (Heather Sears), who is given Maria’s role, in no small part because Lord Ambrose sees her as a potential conquest. It is now that the Phantom (Herbert Lom) shows up as a voice in Christine’s dressing room. The Phantom warns her about Ambrose, who attempts to seduce her later. She’s rescued from this seduction by Harry, who is going to be her love interest. We’re going to be introduced to the Phantom’s murderous assistant (Ian Wilson), who seems to exist to create chaos. While he is killing a rat catcher (Patrick Troughton), the Phantom makes his first appearance to Christine, who is naturally terrified by her and by his one-eyed mask.

Eventually, of course, the Phantom is going to kidnap Christine and drag her into the bowels of the theater. Harry tracks them down and subdues the Phantom’s lackey, and we learn what is motivating the Phantom. I won’t spoil that here. Suffice it to say that despite his intense desire for Christine, he’s willing to let her go if she will sing in the theater for him. We also learn why he distrusts Lord Ambrose.

I realize that a lot of this looks like it is the traditional story, but the final act is considerably different in tone. The Phantom because not a figure of fear or terror and isn’t suddenly attacked by the frightened masses. He becomes not an obsessed and jealous lover or a demanding Svengali, but an actual mentor who is terribly scarred, but somehow not emotionally or mentally. It’s fascinating in that respect.

But it’s not very good. It’s certainly interesting to see the guy who played Alfred the Butler in Tim Burton’s Batman movies as a lecherous creep, but much of the joy of the original story is realizing just how terrible the Phantom is while simultaneously understanding why he is that way. The Phantom here is written far too much to the sympathetic side. Even the murders that happen (like the poor rat catcher) are caused not by the Phantom but by his lackey. Our Phantom, rather than being tortured into insanity but still having understandable motivations, is instead a sort of suffering noble, tortured by the world and perhaps succumbing to parts of his own twisted desires, but ultimately rising above them.

In that respect, while it’s far too old for this to actually be the case, it feels like someone wanted to remake a movie that was originally rated R as a PG or PG-13 movie. And really, does that ever work?

Email ThisBlogThis!Share to TwitterShare to FacebookShare to Pinterest
Labels: horror, musical, Terence Fisher, The Phantom of the Opera