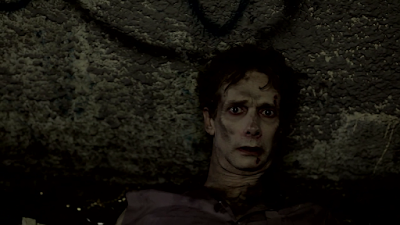 One of my favorite bands is a group from Dayton, Ohio called Guided by Voices. While there are several GbV discs that have great production values, there are a bunch that sound like they were recorded in singer/writer/erstwhile guitarist Rob Pollard’s basement. There’s a particular charm in these lo-fi recordings, an earnestness that simply can’t exist in more professional sessions. Absentia is like that. This is a movie made for $70,000, and it’s far better than a great many horror movies made for 100 times that.

Tricia (Courtney Bell), is a pregnant woman living in a seedy neighborhood in Glendale. Her husband Daniel (Morgan Peter Brown) has been missing for seven years, and while her pregnancy is clearly evidence that she has moved on in some respects, there is a part of her that is still wrapped up in trying to finally close that door and tie off that loose end in her life. Her sister Callie (Katie Parker), a former (and possibly current) addict arrives at her house. Callie is there to help Tricia declare Daniel dead in absentia, find a new place to live, and move on with her life.

Strange things start happening immediately. While out running, Callie encounters a tall, thin man (Doug Jones!) in a tunnel near Tricia’s house. The man seems surprised that Callie can see him, and he begs her to contact his son for him. Callie runs off, but later leaves food by the tunnel for him. Later, she finds a collection of small metal objects left on the doorstep that she assumes were left for her by the man in the tunnel. When she goes to return them, another man (James Flanagan) leaves a plastic bag and tells her not to leave the objects there. Later, the objects turn up in Callie’s bed.

Meanwhile, Tricia is having waking nightmares about her husband. Daniel appears frequently around her, eyes blackened, and staring accusingly at her. But she goes ahead and has him declared dead in absentia. That night, she is visited by Detective Mallory (Dave Levine) for what could properly be called a date. It’s eventually made clear that Mallory is the father of Tricia’s unborn child and that this is sort of an official first real date for them. Tricia has another waking nightmare of Daniel, but it turns out that it’s not a nightmare—it’s really him. He has returned, in the same clothes he was wearing when he left, with his wallet still on him, and with no ability to describe where he was except to say that he was “underneath.”

What follows are glimpses, and just glimpses, of what might actually be “underneath,” and if you are someone who doesn’t like insects, it’s going to be problematic for you. Suffice to say that people who may have been missing will reappear, and others will disappear. We’ll never get a clear look at what is happening, but we’ll get a lot of suggestions.

Absentia is made with a cast of people who weren’t famous and hadn’t done much in the industry, with the exception of Doug Jones, whose presence as a normal human being and not something wrapped in an alien or monstrous skin is kind of surprising. This is actually one of the strongest points of the film. These people look like real people. Courtney Bell was very clearly really pregnant when this film was made, and she looks like a normal pregnant woman. I mean this in the most respectful way possible—she put on more than baby weight with the baby. She doesn’t look like a model who managed to have the perfect body plus the baby belly and who probably got back to her ideal weight in six weeks. No, she’s gained honest weight, and because of this, she looks real in the role. None of these people are Hollywood beauties, and it’s one of the main reasons Absentia feels real.

It’s also a movie that uses its lack of budget to its benefit. We aren’t going to get special effects here, but quick glimpses of monsters. The film frequently doubles back on itself—we get a shock moment, a move to somewhere else, and then a return to what happens after that shock moment. We also get a series of “what if” moments. Tricia talks about Daniel going missing, and as she talks, we see him walk off, zipped up in a body bag, and other possibilities of what might have happened to him.

Absentia creates a real aura of menace and threat. It’s a smart movie, and one that is smart enough to use its limited budget in a way that makes it more effective. Mike Flanagan is yet another director who demonstrates that you can do good work without money—and the fact that after this movie he went on to do Oculus and Hush and then went on to direct Doctor Sleep and both of the recent haunted house miniseries on NetFlix is an indication of this. Talent rises, and Absentia is the start of a very good rise.

Why to watch Absentia: It’s earnest.
Why not to watch: I’m guessing 80% of the $70,000 budget was spent on acquiring Doug Jones.