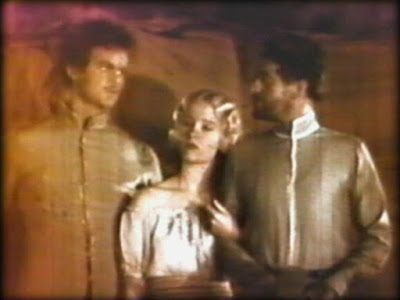 Adolysti connected me to the remaining bits of The Rogue Song when I posted the review for Jojo Rabbit, thinking I was mainly done with the giant Oscars list. Alas, I was not, and wanting something like that little additional bit of closure, I figured I would watch what I could of the film. It’s an interesting thing—only about 30 minutes of actual footage remain, but there is a complete soundtrack for the film. So, what does remain has been pieced together with stills and interstitial titles to give us something like a sense of the entire film.

The Rogue Song is very much a musical, and that becomes clear almost at the moment the film starts. The story takes place in pre-revolutionary Russia (roughly 1910). A bandit leader named Yegor (Lawrence Tibbett) chances upon Princess Vera (Catherine Dale Owen) at an in. The two are attracted to each other, but find that there are a number of impediments to their relationship. Vera’s companion (Nance O’Neil) gives Yegor a string of pearls for being amusing, but then accuses him of stealing them when he refuses to romance her.

A much bigger problem comes from the relationship between Vera’s brother, Prince Serge (Ullrich Haupt) and Yegor’s sister Nadja (Florence Lake). “Relationship” is far too nice for the reality of this, actually. In fact, Nadja accuses Serge of violating her, and covered in shame, Nadja kills herself. Yegor kills Serge in retaliation, throwing yet another spanner in the works of the film’s central romance.

Essentially, Yegor is a singing version of Robin Hood. In fact, a great deal of the film plays like a musical Robin Hood, at least in terms of the way Yegor is depicted. There are, clearly, elements of Romeo and Juliet here as well. It’s a rough mix of the two stories, and somehow a great deal less than either of them.

There are a number of problems with The Rogue Song, not all of which are the fault of the film. One of these is the fact—and there is no escaping this—that Lawrence Tibbett looks like Jack Black circa Nacho Libre and minus about 50 pounds. Same goofy little mustache, same curly mop of hair. That’s not Tibbett’s fault, but it’s impossible not to see.

There’s also the issue of Laurel and Hardy. Of the old school film comedians, Stan Laurel and Oliver Hardy are probably the least remembered and beloved with the possible exception of the Ritz Brothers. Most people would rank them behind Chaplin, Lloyd, Keaton, the Marx Brothers, and Abbott and Costello, and perhaps unfairly. They were a fine comedy duo, but their particular style of comedy doesn’t translate well to something where most of the visuals have been lost. Right now, The Rogue Song is more a radio drama than anything else, and that’s very much to the detriment of the boys’ addition to the film.

Their presence is a bigger problem, though. Frankly, they don’t fit tonally. Apparently, Laurel and Hardy were added to the movie because of their star power at the time, and their purpose is to add a great deal of slapstick humor to a film that involves rape and murder. That seems ill advised at best. Even if it did work tonally, the duo was added after the fact as something of an afterthought. They appear in only one scene with Tibbett, and so in many ways they almost feel like they are in a different movie.

As for the music, well, it was fine. I’ve become much more accepting of musicals over the past decade and there are plenty that I enjoy a great deal. My issue here is that The Rogue Song is very operatic, and that’s never (or at least very rarely) going to play well with me. It’s a reminder that this was in something of fashion at the time—Tibbett was an opera singer, and thus would have been very much in demand for this sort of role. It’s also a reminder that this trend didn’t last long. This was Tibbett’s debut film, and aside from a television appearance in the early ‘50s, his film career was done by 1936.

I didn’t really enjoy The Rogue Song a great deal, but I am very pleased to have seen it.

Why to watch The Rogue Song: Because we need to respect the past.
Why not to watch: What’s here isn’t fantastic, and what’s missing is most of it.