Ten Days of Terror!: The Curse of Frankenstein

Film: The Curse of Frankenstein
Format: DVD from NetFlix on the new portable. 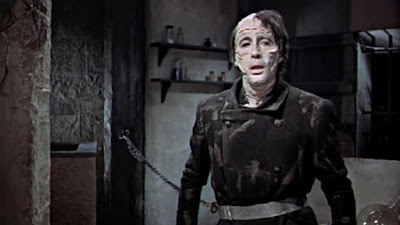 Hammer horror movies are sort of their own thing; you either love them or you don’t. As it happens, I love them. The Curse of Frankenstein is in many ways the Ur Hammer horror film. The Curse of Frankenstein was the first horror hit for the studio. It also has the honor of being the first real on-screen pairing of Peter Cushing and Christopher Lee. They’d been in movies together before, but not in starring roles. This was the movie that created their friendship, which lasted until Cushing’s death.

There was some interesting controversy regarding the film as well. Evidently, Hammer was not allowed to do anything that was reminiscent of the Universal Frankenstein films, which meant that everything here had to go in a very different direction. The plot is still in the same direction as Mary Shelley’s novel, of course, but it’s significantly different, especially in the look of the monster.

The film starts with Victor Frankenstein (Cushing) in prison for murder. I mean, you’d think that he’s in prison for creating horrific monsters, of course, but we’re still going to get most of the movie in flashback. As a young man, Victor (Melvyn Hayes as a youth) becomes Baron Frankenstein. He hires a tutor named Paul Krempe (Robert Urquhart), and the two begin studying. Soon enough, they are studying the very forces that create life. This is not a surprise, right?

Eventually, they do manage to bring a dog back to life, and Victor wants more. He decides it is time to create a man, and sets about finding body parts. Paul balks at this and becomes more and more concerned with Victor’s behavior. He becomes even more concerned when Victor’s cousin Elizabeth (Hazel Court) shows up, stating that she will live with Victor and that the two are engaged. Knowing what Victor is working on, Paul pleads with her to leave, but she does not.

Paul becomes a little more complicit in Victor’s schemes when Victor invites Professor Bernstein (Paul Hardtmuth) to his house. Victor is on a search for the right brain to animate his creature, and he kills the professor, making it look like an accident. A confrontation with Paul damages the brain, though, and when Victor does finally get the creature to live, it attacks him. He and Paul track it down and kill the monster, but, in secret, Victor revives the monster again.

To be blunt, The Curse of Frankenstein is not a great film, but it is a very fun one. According to the story, at one point early in the filming, Lee burst into Cushing’s dressing room, complaining that he didn’t have any lines. The reply from Cushing was that he was lucky—Cushing had read the script. It’s not as bad as that, actually, but this is not the kind of film that is going to get the Academy to pay attention to it. In truth, it’s a very interesting reinterpretation of the original Frankenstein story. It’s considerably different from the story, both the book and the original Universal film, but it’s a very interesting take on the basic idea.

It’s also a film that spent a good amount of its money on the costuming budget, and to good effect. As the first real success for Hammer horror, there might be something to the idea that the film significantly influenced the more Gothic path that their films took in the following years.

Is this the best of the Hammer films? Probably not, but it’s a dame good one for whatever the original censors (and Peter Cushing) might have thought. The story is a great version of the basic tale, and both Cushing and Lee are great, as is Lee’s unique monster makeup. And the ending is a doozy.

Why to watch The Curse of Frankenstein: The first major Lee/Cushing pairing.
Why not to watch: It’s too damn short!