Ten Days of Terror!: The Creature Walks Among Us

Film: The Creature Walks Among Us
Format: DVD from Cortland Public Library on The New Portable. 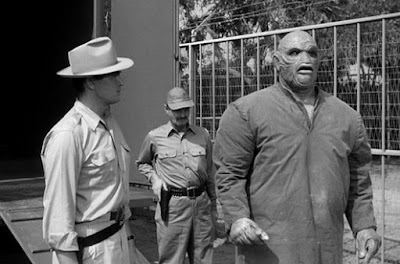 Evidently, there is something irresistible about creating a trilogy, so despite the lackluster second Creature from the Black Lagoon film, we’re going to be treated to a third, called The Creature Walks Among Us. Like the sequel, the only real connection here is going to be the Creature himself—we’ve got a whole new group of scientists and adventurers who want to capture the Creature, who managed to survive the ending of the previous movie and go hiding in the Everglades. Honestly, though, “The Creature from the Everglades” doesn’t have that same ring to it.

This time, our team of scientists is led by Dr. William Barton (Jeff Morrow), who we soon learn is mentally unstable. A part of his instability comes from the person of his wife, Marcia (Leigh Snowden). It’s clearly not a very happy marriage, in part because of his possessiveness and the fact that Marcia is very quickly the target of advances from the group’s guide, Jed Grant (Gregg Palmer).

Oh, and this is going to be important, but not right away. Instead of dealing with the sexual politics of the group, we’re going to go creature hunting, which will involve scuba gear and a lot of very tiny and upsetting swim trunks on the men. The first attempt to find the creature goes south when Marcia swims too deep and becomes rapturous and needs to be saved by deep-voiced scientist Dr. Tom Morgan (the awesomely named Rex Reason, evidently his real name). Eventually, the team tracks down the Gill-man and in the process of capturing him, set him on fire—yes, really. As they try to help him recover, they discover that he has a rudimentary system of lungs, which they force to work to keep him alive.

Because this is the ‘50s and because no one understood what science meant, we’re going to get massive amounts of really, really dumb science here to explain what is happening. Essentially, the fire—in addition to giving the Creature an excuse to use his lungs—causes the top layer of his scales to slough off, making him much closer to human. They won’t tell you this in the movie, either, but it also evidently made him grow, since the actor who plays the Gill-man on land was six inches taller than the swimming actor (Don Megowan and Ricou Browning, respectively).

Anyway, with the creature becoming more human, no one wants to see him walking around with his junk hanging out, so they make clothing for him and attempt to more or less assimilate him into human society. It’s very clear, though, that the Gill-man is longing for a return to the water even though, through the process of his transformation, he has evidently lost his gills, making him a Non-Gill-man.

Things come to a head when we get back to the sexual politics of our little boat crew. Barton, having gone completely around the bend with jealousy over the constant attempts by Jed to seduce his wife, kills Jed in a fit of rage. And, knowing that that’s a bad thing, he decides to pin the crime on the Creature, who is somehow able to figure out that Barton is going to pin a murder rap on him despite not really having a concept of murder. Chaos ensues.

I rather like the Creature as a movie monster. Sadly, two of his movies are pretty bad. I’d have loved for him to have had a longer career for Universal, but in a lot of ways, it’s probably best that he ended with this trilogy, at least until Guillermo del Toro resurrected him in The Shape of Water.

Look, I wanted to like this movie because I do have a particular love for the Universal monsters, and the Gill-man has always been a favorite. There’s an air of tragedy to him and this movie attempts to build on, but really just co-opts. And while I appreciate the fact that the screenwriters tried to do something very different with the creature, making him a land-dweller and putting him in clothing just made him ridiculous and vaguely Tor Johnson-y.

It is interesting, though, that rather than making the creature lust-crazed over the sight of Marcia, we get an attempt at something a great deal deeper, even if it doesn’t work. In fact, in a many a film like this one, the natural pairing would be between Marcia and Tom Morgan, but we don’t go there, at least not clearly or obviously. In a sense, for much of the actual drama here, the Creature becomes kind of secondary.

As a final note, Rex Reason and Jeff Morrow worked together on a true science fiction classic in This Island Earth. In that film, Reason played the studly deep-voiced scientist and Morrow played the alien leader Exeter. It might be a better movie than this one, but it was selected as the central target for Mystery Science Theater 3000: The Movie, albeit severely edited. Evidently, they had a thing for movies that featured bad science.

Why to watch The Creature Walks Among Us: You’ve come this far. Why not finish the trilogy?
Why not to watch: The Creature in pants.

Email ThisBlogThis!Share to TwitterShare to FacebookShare to Pinterest
Labels: horror, John Sherwood, science fiction, The Creature Walks Among Us