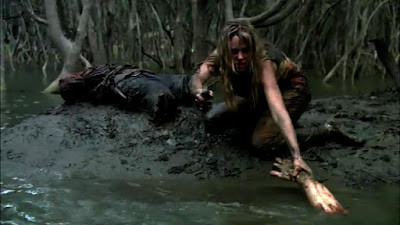 There is a particular style of Man vs. Nature film that, when done well enough, can’t help but work. While they’ve probably been around forever, I tend to associate this style with the back half of Jaws, when the three men go out on a small boat to hunt the killer shark. There’s no help coming and it’s just the man against the creature until the final credits roll. Naturally, this works best for big, scary creatures that eat people. I mean, sure you’ve got films like The Killer Shrews that follow this formula, but it seems popular for sharks and alligators. Deep Blue Sea, Open Water, Rogue, Crawl…all of these are exemplars of the style. That’s also what we’re going to get with Black Water.

Black Water is an Australian film based (we are told) on true events. Like any good Man vs. Nature film, this is a high concept movie. Here’s the entirety of your plot: a woman, her pregnant sister, and the sister’s husband go fishing in the middle of nowhere in Australia with a guide. They are soon attacked by a very large and ferocious crocodile and attempt to survive. That’s it.

Because there isn’t a great deal of story, or even a great deal of characterization of the people involved, a movie like Black Water is difficult for me to review in my normal style. There are essentially three characters here; the guide (Ben Oxenbould) gets dragged by the croc when the creature tips over their boat, and this is essentially the inciting incident for the film. After that, we’re left with the three people who don’t really know what they are doing. Adam (Andy Rodoreda) wants desperately to be in charge. Grace (Diana Glenn) has just discovered that she is pregnant. Lee (Maeve Dermody) is the one who has to take the most risks, and is also the one whose name you’re going to remember, since roughly half of the dialogue is the other two characters screaming her name.

Despite this, a great deal of Black Water really works. As I said at the top, when this style is done well, it’s difficult for the film to not work. Black Water isn’t the best of the genre—it’s not even the best alligator/crocodile-themed film in the subgenre, but it is surprisingly effective at times. This comes down to a couple of important ideas.

First, while the characters are frequently dumb, they’re understandably dumb. These are people who act pretty much the same way you or I would in this situation. They have no idea what they are doing, and so they frequently screw things up because they literally don’t know any better and don’t know that they shouldn’t do these things. And, because the bulk of the audience doesn’t know that they’re doing things that are ultimately pretty stupid, we don’t always know that they’re doing the wrong thing, either.

There is also a great deal of menace in the way that the film has been made. The croc isn’t overused. Rather than appearing every couple of minutes, it spends most of its time under the water. We don’t know where it is, which means it could be anywhere. The creature casts a long shadow over everything, and a lot of what happens does because our three victims are paralyzed by fear—the crocodile could be anywhere, and so they are afraid to do anything. And further, everything they do has an added air of danger and recklessness.

My main complaint is that the characters are very much cardboard cutouts. I realize that you don’t need characters for a movie like this to be extremely compelling or have deep backstories, but I do want something to hang my hat on. The only thing I can tell you about Grace as a character is that she’s just discovered that she is pregnant. Adam…is married to Grace, doesn’t know about the baby, and wears glasses. As for Lee, there were a few moments where I was legitimately hoping she’d get dragged under, we’d get one last round of Adam and Grace screaming her name, and then we’d never have to hear it again.

Still, I think it’s worth a watch. Honestly, you could turn this on without the sound and it would be just about as good.

Why to watch Black Water: Man vs. Nature is always a compelling story.
Why not to watch: Lee! Lee! LEEEEEEE! LEEEEEEE!